Long Island employment lawyers Famighetti & Weinick PLLC have obtained a $221,980 judgment against a Long Island metal fabrication company and its owner.  The judgment in this sexual harassment and retaliation case was issued after an inquest on damages, held in Suffolk County Supreme Court in September 2019.

In this case, F&W’s client alleged she faced ongoing, persistent sexual harassment while working for the defendant corporation. Some of the conduct included supervisors and co-workers suggesting that they wanted to perform sex acts on the plaintiff, talking about her body, and suggesting that she participate in a wet t-shirt contest at work.  After the plaintiff complained about these acts, the owner first reduced her work hours, then terminated her entirely.

F&W first filed a charge of discrimination with the New York State Division of Human Rights. The Division is the New York State agency charged with investigating workplace discrimination.  The defendant corporation initially appeared and defended itself. But, after the Division issued a finding of probable cause believing that the corporation may have violated the law, the defendants disappeared. Indeed, the case proceeded to a public hearing before an administrative law judge, but the defendants did not attend. Accordingly, F&W asked the judge to dismiss the case and annul the election remedies so that the case could be filed in court.  The administrative law judge granted the request and the case was filed Supreme Court.

Again, in Supreme Court the defendants did not make an appearance or defend themselves. So, F&W filed a motion for a default judgment on liability.  Justice Pastoressa granted the motion and scheduled a date for an inquest, to hear evidence about damages.

On September 12, 2019, Long Island employment lawyer Matt Weinick appeared in Supreme Court with the client. Weinick delivered an opening statement and called the plaintiff to testify. The plaintiff bravely took the stand and in response to direct questioning by Weinick, she told the judge about the disgusting and abusive sex based conduct to which she was subjected while at work.  Further, the plaintiff showed the judge documentary evidence supporting her account, including a shocking sticky note left on her computer one day:

The plaintiff also testified about the emotional damages she incurred, including how the conduct affected her relationship with her boyfriend and her self-esteem.  The powerful and emotional testimony clearly moved everyone in the courtroom.

At the conclusion of the evidence, Weinick offered legal arguments to the judge supporting the range of appropriate awards for a case such as this one.  In real time, the judge reviewed the cases cited by Weinick, on his computer from the bench. With no hesitation, the judge awarded emotional damages of $200,000, noting the award was more than adequately supported by the testimony and evidence. Further, the judge awarded back pay for the short time that the plaintiff was out of work after being fired.  Finally, after post-trial briefing, the court awarded F&W attorneys’ fees for its work on the case and reimbursement for costs incurred.

We are so proud of our client for courageously walking into a courtroom, taking the stand, and testifying about the horrible conditions she faced at work. The judgment will not alleviate her suffering, but it is a symbol that justice has prevailed.

If you have questions about discrimination or retaliation, or if you believe you are facing sexual harassment in the workplace, contact a Long Island employment lawyer at Famighetti & Weinick PLLC. More information about workplace discrimination is available on our website at http://linycemploymentlaw.com. We can be reached by telephone at 631-352-0050. 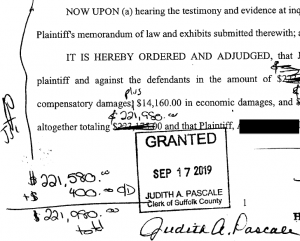