In employment discrimination claims, courts generally apply one of two methods of analyzing the claims. In a mixed-motives analysis, plaintiffs must show the employer was motivated, at least in part, by a discriminatory animus. This is considered a more lenient standard. In but-for causation, the plaintiff must show that discrimination was the but-for cause of the employment action taken against the employee. This is considered a stricter standard. On April 18, 2019, the Second Circuit Court of Appeals, New York’s highest federal court, ruled that but-for causation is the appropriate legal standard applicable to disability discrimination claims. Today’s Long Island employment law blog discusses the decision.

In Natofsky v. City of New York, the plaintiff alleged disability discrimination and retaliation against the City of New York. He brought his claims under the Rehabilitation Act. The trial court applied a standard requiring the plaintiff to show that discrimination was the “sole” reason that the employer took a adverse actions against him. Applying this standard, the trial court dismissed the employee’s claims, then the employee appealed.

On appeal, the Second Circuit first looked at whether the employee was required to show that discrimination was the sole reason for the acts taken against him. The court determined that the Rehabilitation Act incorporates the standards from the Americans with Disabilities Act (ADA). So, although the Rehabilitation Act indeed uses language indicating discrimination must be the sole reason, subsequent amendments to the Act made clear that courts were to look to the ADA for the appropriate standard.

Turning to the ADA, the Second Circuit has to determine the appropriate analysis called for by the statute. The court noted that in the past, courts in New York have used a mixed-motive analysis in reviewing disability discrimination claims. In mixed-motives cases, plaintiffs can show discrimination was a motivating factor in the employer’s decision to take action against the employee.

The appellate court held that but-for causation is the necessary standard to be applied in disability discrimination cases. In reaching the decision, the court relied on Supreme Court decisions in Gross and Nassar which held that statutes such as the ADEA which use “because of” language require but-for causation. Although Title VII uses similar language, Congress amended Title VII to use a mixed-motive test. Because Congress did not amend the ADA, the court was persuaded that but-for is the appropriate test.

Although there is no doubt that the decision is a set back for employees’ rights, there are some bright points in the decision. First, but-for does not mean that discrimination must be the sole reason. This opinion is consistent with directions from the Supreme Court.

But also, Judge Chin dissented. The dissent sets forth a blue print for employee advocates to argue to the Supreme Court why mixed-motives is appropriate, instead of but-for. Moreover, that the Second Circuit’s decision was not unanimous, shows that the decision was not clear cut which may provide hope to employees that enough Supreme Court justices can be persuaded to reject applying but-for analysis to disability discrimination.

Finally, because the decision is an interpretation of federal law, there may be some question as to whether the but-for standard applies to disability claims brought under the New York State or New York City Human Rights Laws. In particular, the New York City Human Rights Law is designed to be interpreted liberally and expansively, so it is doubtful courts will apply a heightened standard to those claims.

Unfortunately, the Natofsky case is a set back for employee rights and disability discrimination claims. Employee advocates should watch the law develop as the issue may be brought to the Supreme Court. 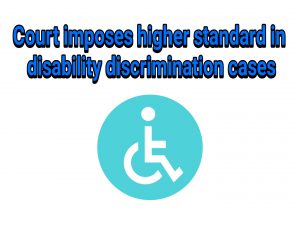