On October 9, 2018, new laws concerning sexual harassment in the workplace will take effect in New York State. Included in these changes are coverage for independent contractors under the New York State Human Rights Law, training requirements for employees, and employee handbook and policy requirements. Today’s Long Island employment law blog looks at some of these changes.

The New York State Human Rights Law is the primary source of state employment discrimination laws in New York. The HRL prevents many forms of discrimination in the workplace including discrimination based on an employees age, race, gender, national origin, sexual orientation, sex, religion, disability, or criminal conviction status.  The law, however, generally applied to only employees.  In other words, independent contractors, vendors, or others, may not have been protected from sexual harassment in a workplace if the individual was not an employee of that particular employer.

The 2018 changes to New York law include an amendment to the Human Rights Law so that subcontractors, vendors, consultants, and other service providers will be protected against sexual harassment.

Mandatory Training and Implementation of Policies

New York State has issued a form sexual harassment policy which employers may use. Famighetti & Weinick PLLC, however, recommends that employers speak to an employment lawyer to draft or revise a comprehensive policy which covers all forms of discrimination which are illegal under federal, state, and local laws on Long Island.

The changes to New York Law concerning workplace sexual harassment are comprehensive. Employers should not take it upon themselves to determine their compliance with the law.  A Long Island employment attorney can assist in drafting all the state required policies and forms and can train employees consistent with the state guidelines and laws.

If you have a question about the changes to the New York State laws concerning sexual harassment, speak to a Long Island employment lawyer at Famighetti & Weinick PLLC at 631-352-0050. On the web, we are available at http://linycemployment.com.  We represent employers and employees so if you believe you are a victim of sexual harassment in the workplace, we can help! 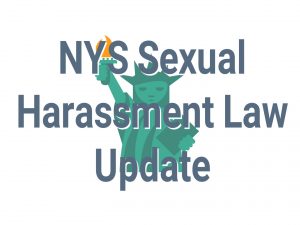