On February 14, 2019, Congressman Robert C. “Bobby” Scott sponsored a bill in the United States House of Representatives which would amend the Age Discrimination in Employment (ADEA) laws. Entitled the Protecting Older Workers Against Discrimination Act, the act is a reaction to a Supreme Court ruling issued nearly 10 years ago which was seen as limiting employees ability to prove age discrimination claims.  Today’s Long Island Employment Law blog discusses the proposed amendment.

Congress amended Title VII of the Civil Rights Act to clarify that employees suing for discrimination under Title VII can prove discrimination by using the mixed motives test.  Title VII prohibits employment discrimination based on race, national origin, sex, gender, and religion.  But, at the time Gross was decided by the Supreme Court, Congress had not made the same amendment to the ADEA. The Supreme Court determined that because Congress did not amend the ADEA, then it presumed Congress intended that age discrimination claims remain subject to the but for analysis.

H.R. 1230 was introduced to address the Gross decision.  Indeed, the proposal specifically notes that it’s purpose is to reject the Gross holding and to clarify that mixed motive analysis is the proper standard for age discrimination cases.

Notably, the bill was co-sponsored by seven other Congressmen and women, including three democrats and four republicans.  Congressman John Katko from New York is a co-sponsor.

The bill has been referred to the house committee on Education and Labor.  No further action has been taken on the bill since February, but the employment lawyers at Famighetti & Weinick PLLC will be closely watching the bill’s progress.

If you have questions about age discrimination in employment, mixed motive or but analysis, proving discrimination cases, or about H.R.1230, contact a Long Island employment attorney at Famighetti & Weinick PLLC.  Our phone number is 631-352-0050 and our website is http://linycemploymentlaw.com. 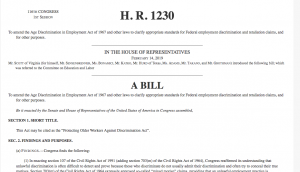