The Americans with Disabilities Act, or the ADA, is a federal law which regulates discrimination against individuals with disabilities. The law prohibits discrimination in several areas, including in employment. Like most words in the law, however, disability has a specific definition meaning that to be protected under the law, an individual must have a disability as defined by the ADA. On June 30, 2021, the Second Circuit Court of Appeals in New York joined other jurisdictions and took an expansive interpretation of the meaning of disability. Today’s Long Island employment law blog discusses the case.

To be covered under the ADA, an individual must have a disability as defined by law. The ADA defines disability as a physical or mental impairment that substantially limits one or more major life activities. If an individual has a medical condition that does not meet this definition, then the ADA does not apply and the individual is not entitled to reasonable accommodations under the law and is not protected from discrimination based on the medical condition.

In 2002, the Supreme Court of the United States narrowly interpreted the definition. The Court determined that the words used by Congress, such as major and substantially, implied that disability is a demanding standard. The Court further held that to qualify as a disability, a person’s impairment must be permanent or long term.

Reacting to the SCOTUS ruling, in 2008, Congress amended the ADA. Among other things, Congress specifically noted that the substantial limitation requirement is not to be an exacting standard. Congress further instructed that the definition of disability should be broadly interpreted to allow for expansive coverage.

Moreover, the amendments rejected a timing requirement. Federal regulations implementing the amendments to the ADA noted that impairments which last less than six months can be substantially limiting, and thus can constitute a disability.

In its June 30th opinion Hamilton v. Westchester County, the Second Circuit Court of Appeals reviewed this history and noted that other jurisdictions across the country have applied these principles in cases before them thereby clearly establishing the law in those jurisdictions that the ADA amendments mean that impairments which may last less than six months can nonetheless qualify as a disability.

What does this ruling mean? The Hamilton decision is a good example. In Hamilton, the plaintiff was jailed at a county jail when he injured his knee, tearing the meniscus and dislocating his knee. The plaintiff had to use crutches to move around which caused issues for him because the jail was not well designed for inmates to get around with crutches. The plaintiff sued, alleging among other things, that under the ADA, the jail failed to accommodate his disability.

The lower court dismissed the plaintiff’s ADA claim. The court ruled that the temporary injury, to wit, the knee injury, does not qualify as a disability under the ADA. Since the plaintiff could not have a qualifying disability, he could not maintain any ADA claim against the jail.

On appeal, the Second Circuit reversed the lower court. The appellate court determined that the lower court committed error by holding that a temporary impairment can never constitute a disability.

The Hamilton decision is a win for workers. It opens the door to the possibility that temporary impairments may be considered a disability under the ADA. But, it still leaves open questions about the extent to which a temporary impairment must substantially limit a major life activity to ultimately be deemed a disability under the ADA. F&W will continue to watch developments on this issue.

Notably, New York state law has more liberally interpreted the meaning of a disability under its version of disability discrimination law, the New York State Human Rights Law. Thus, independent of how federal law develops, temporary impairments may be a disability, even if they do not substantially limit a major life activity.

Disability discrimination questions can be complicated because of the complex analysis required to determine if an individual has a disability under the law. Long Island employment lawyers Famighetti & Weinick PLLC are available for free consultations to discuss disability discrimination issues, such as requests for a reasonable accommodation. Our employment attorneys, Peter Famighetti and Matthew Weinick, are available at 631-352-0050. 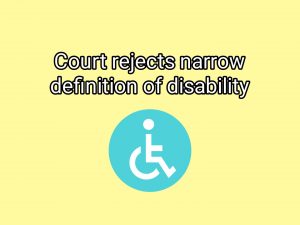 Court rejects narrow definition of disability under the ADA