The Fair Labor Standards Act (FLSA) is the federal law which, generally, regulates minimum wage and overtime that employers must provide to employees. Statutes of limitations set the time periods in which a lawsuit must be filed. For the FLSA, the statute of limitations is either two years or three years, depending on whether the violation was willful or not. Today’s Long Island employment law blog discusses a recent appellate court decision concerning willfulness in FLSA cases.

In the new position, the plaintiff worked 45 to 50 hours per week, for four years. Although the FLSA requires that employers pay workers an overtime premium for all hours worked over 40 in a week, the plaintiff’s employer did not pay him overtime. On January 8, 2019, the worker filed a lawsuit alleging a number of claims, including that he was not paid properly under the FLSA and the New York Labor Law.

The company moved to dismiss the plaintiff’s lawsuit. The trial court was persuaded to dismiss all of the plaintiff’s federal claims, including the FLSA claim. The court dismissed the FLSA claim because it determined that the complaint did not adequately willful conduct, necessary for the three year statute of limitations. Based on the two year statute of limitations which would then apply to the claim, no FLSA claims were timely.

Before delving into the particulars of the FLSA, it’s necessary to review some mundane federal civil procedure rules. All courts maintain rules of procedure. Rules of procedure set forth instructions for how litigants must make motions, conduct discovery, and file and respond to case initiating documents, such as complaints. Federal courts use the Federal Rules of Civil Procedure. Each state uses its own set of procedures, but in New York, courts use the Civil Practice Law and Rules (CPLR).

In addition to the written rules, litigants must be aware of judicial decisions which interpret the rules and give guidance on how to use the rules. For plaintiffs in federal court, one of the most important decisions in recent history is known as Ashcroft v. Iqbal. In Iqbal, the Supreme Court interpreted the federal rules as requiring that plaintiffs plead sufficient facts to render their legal claims plausible. Federal courts across the country now use this plausibility standard to evaluate whether complaints should be dismissed, or allowed to proceed in court.

In Whiteside, the issue was whether this Iqbal standard applies to the FLSA willfulness requirement to get a three year statute of limitations, or whether plaintiffs can simply allege in a conclusory manner that the defendants’ conduct was willful. To resolve this question, the Whiteside court first noted that appellate jurisdictions across the country are divided on the answer and that trial courts within this jurisdiction are also split.

Applying the plausibility rule to the allegations in Whiteside, the Second Circuit held that the standard was not met. The Court determined that the complaint did not allege any facts from which the Court could infer that the defendants failure to pay overtime was willful. Specifically, the complaint did not show facts that could establish the company acted with actual knowledge of a violation or by reckless disregard. Instead, the complaint showed mere negligence. Because the two year statute of limitations applied, and because no unlawful acts under the FLSA occurred within those two years, the Court held that the trial court properly dismissed the case.

Notably, Judge Chin dissented, arguing the majority required too much of a factual showing at such an early stage of the litigation.

If you are troubled that the company may have gotten away with improperly paying the plaintiff because of a technicality, fret not. New York’s labor law provides for a six year statute of limitations. With some exception, New York’s wage laws mirror the federal law. Once the Whiteside court dismissed the federal claims, the court lacked jurisdiction to hear the state law labor claim (a subject for another blog). But, Whiteside was likely able to re-file those claims in a New York State court.

If you have questions about unpaid wage and overtime cases, the FLSA, the New York Labor Law, statute of limitations, or pleading requirements for lawsuits in New York, contact a Long Island employment lawyer at 631-352-0050.

Remember, our Hudson Valley office is now open in Middletown, New York and we are accepting unpaid minimum wage and unpaid overtime cases from Orange County, Putnam County, and Ulster County, among others. Call us at 845-669-0040. 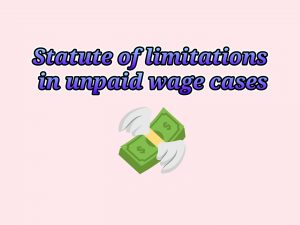 Attorney Advertising – Prior results do not guarantee future performance.