The law provides different standards of causation. Sometimes, discrimination must be a determinitive factor in the decision to take action against the employee, meaning that the employer would not make the same employment decision without a discriminatory animus present. This is usually referred to as “but for” causation. Other times, the law says that the discrimination can be one of many factors, usually called a mixed-motive or motivating factor standard.

Many employment discrimination laws, particularly federal laws, do not spell out which type of causation is required. So, courts are left to interpret the appropriate level of causation.  Recently, led by Supreme Court decisions, courts have been applying but-for causation to discrimination cases, except in circumstances where Congress has expressly acted to convey its intent that some other level of causation applies. Based on the decisions, we have clarity that but-for causation applies to age discrimination and retaliation claims. Motivating factor applies to federal Title VII claims (race, religion, sex, national origin).

42 U.S.C. § 1981 is a federal civil rights law. On its face, the law prohibits, among some other things, race discrimination with respect to making contracts. Over the years, courts have interpreted the statute as prohibiting race discrimination in employment and have applied the law in much the same way as Title VII discrimination claims.

Section 1981 does not expressly state the level of causation necessary to prove a claim. Since courts have interpreted Section 1981 consistently with Title VII, most courts have applied the same level of causation — the motivating factor test.  In Comcast Corp. v. National Association of African American-Owned Media, the Supreme Court was faced with the question of which standard applies to race discrimination claims brought under Section 1983.

But-for is generally considered a higher level standard of causation than motivating factor. So, this is not a good outcome for employees. But, the outcome is not unexpected. The law has been shifting towards favoring but-for causation in employment discrimination cases arising under laws other than Title VII.  As discussed in the next case, there remains glimmers of hope though.

Under the federal provision, the ADEA prohibits all personnel decisions concerning employees over the age of 40 be made free from any discrimination based on age. The parties in Babb v. Wilkie disagreed on whether this language means but-for causation applies, or some other standard applies. The disagreement reached the Supreme Court which issued a decision in April 2020.

As in Comcast, the justices quickly reached a decision that the plain meaning of the statute leads to the conclusion that but-for causation does not apply (Justice Thomas dissented and Justices Sotomayor and Ginsburg concurred). Relying on the “free from” language, the court determined that the language means that personnel decisions must be made untainted by age discrimination. Thus, the federal government is held to a stricter standard than private employers.

Notably, the standard applies to only liability. To obtain damages, employees must nonetheless prove that age discrimination was the but-for cause of the employment decision.

If you have questions about age discrimination or race discrimination, standards of causation, or the Comcast or Babb decision, contact a Long Island employment lawyer at Famighetti & Weinick PLLC. Our telephone number is 631-352-0050. More information about employment discrimination is available on our website at http://linycemploymentlaw.com. 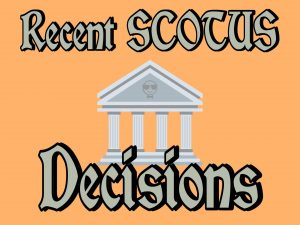