Before even getting to the question of damages, plaintiffs must always first prove liability. This means that an employment discrimination plaintiff must first prove that the employer in fact engaged in unlawful discrimination or retaliation. We often describe this step by analogizing it to baking. In a lawsuit, a plaintiff must prove certain elements. Elements are like ingredients. If, for example, we were baking a cake, we need, for simplicity purposes, four ingredients: (1) flour, (2) sugar, (3) butter, and (4) eggs.  If we did not have one of these ingredients, we may make something resembling a cake, but it would not be a cake.

Similarly, in the world of employment discrimination, a plaintiff must prove four “elements” or “ingredients” to win the liability part of his or her lawsuit.  In short, those elements are: (1) membership in a protected class (such as race, religion, disability, etc.), (2) being qualified for the job; (3) an adverse action (meaning something legally “bad” happened such as being fired); and (4) causation – a showing  that the bad thing happened because the employee belongs to a protected class. If the plaintiff does not prove one of these elements, then the “cake” won’t reason, i.e. the plaintiff cannot prove the case and will not be entitled to any damages whatsoever.

Once a plaintiff proves his case by meeting each one of the elements, the plaintiff can prove damages. Victims of employment discrimination in New York can, generally, recover four different types of damages: (1) economic damages; (2) emotional damages; (3) punitive damages; and (4) attorneys’ fees and costs.  Each of these damages are described below.

Economic damages include all out of pocket costs incurred by the discrimination victim because of the employee’s unlawful conduct. Examples include loss of pay, loss of pension or retirement payments, and health insurance costs. Victims are typically entitled to interest on awards of economic damages. The damages, however, typically are awarded only for back-pay which is damages calculated from the time of the discrimination until the time of the award. Courts are reluctant to award front pay, or future damages.  In other words, a victim who is unlawfully terminated in 2016 and receives a favorable jury verdict in 2018 can receive back pay from 2016 to 2018, but usually not front pay from 2018 to some other point in the future. In addition, victims must try to mitigate damages by looking for new work.

Emotional damages are the hardest category of damages to quantify. But, emotional damages are generally considered either garden variety or more severe.  Garden variety emotional damages fall on the lower end of the spectrum of awards and typically will not exceed $50,000. Garden variety damages may be awarded where a plaintiff does not have medical corroboration for her symptoms or where the plaintiff testifies about vague and general symptoms of emotional distress.  Higher awards of $200,000 may be appropriate where a plaintiff testifies about significant emotional distress such as changes in eating and sleeping behavior, withdrawing from socializing, hair loss, and other extreme symptoms.  If a medical professional testifies about those symptoms, the awards may exceed $200,000 and can reach into the millions, but only with evidence of the most extreme mental distress.

Punitive damages are designed to punish defendants who acted recklessly or wantonly. They are also used to deter others from acting in a similar manner. Punitive damages, if awarded, must be relative to the other damage awards. For instance, a court will not likely uphold a punitive damage award of $10,000,000 where the plaintiff was able to prove only $10,000 in other damages.

Prevailing plaintiffs in employment discrimination lawsuits are also able to recover attorneys fees and costs. At the conclusion of an employment discrimination lawsuit, the attorney can submit time records to the court and ask the judge to order the defendants to pay for the attorneys’ time on the case. Costs may be also be imposed against the employer, including the costs for filing the lawsuit and the costs for deposition transcripts.

The damages available to victims of discrimination can be confusing. Damages are highly fact specific and each case must be reviewed individually to determine the amount of each category of available damages. To determine how much your employment discrimination case may be worth, contact a Long Island employment lawyer at Famighetti & Weinick PLLC at 631-352-0050 or http://linycemploymentlaw.com. 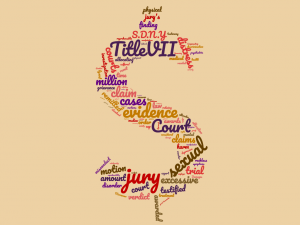 Damages in an Employment Discrimination Lawsuit