Through the Fair Labor Standards Act (FLSA), Congress enacted laws which set minimum wage and overtime pay requirements for employers. The Department of Labor is authorized to issue further guidance about the law, to implement additional rules concerning overtime and minimum wage, and to enforce compliance with the rules and regulations. On September 24, 2019, the United States Department of Labor issued a final rule concerning updates to the overtime rules existing for the past 15 years. Today’s Long Island employment law blog discusses these changes.

Under the FLSA, employers must pay minimum wage to employees. Currently, the federal minimum wage is $7.25 per hour. States may set higher rates, though. For instance, in New York, the minimum wage rate varies depending on county, but it is at least $11.10 per hour and can be as high as $15 per hour in New York City (as of 2019).

In 2004, the Department of Labor created a standard duties test which set three criteria for employers to determine whether an employee is exempt or non-exempt: (1) the employee must be paid on a salary; (2) the salary level must meet a minimum salary level (currently $455 per week); and (3) the employee’s duties must either be executive, administrative, or professional, as further defined by the Department’s regulations.

The 2019 rule seeks to update the Department’s regulations consistent with the Texas court’s decision. The rule changes the law in at least four ways: (1) the minimum salary level is raised from $455 per week to $684 per week (roughly $35,568 per year); (2) highly compensated employees qualify as employees earning $107,432 per year (increased from $100,000); (3) 10% of an employee’s non-discretionary bonuses and incentive pay can be used to satisfy the standard salary level if the payments are made at least annually; and (4) revisions to the special salary levels for employees in U.S. Territories and motion picture industry.

In a Department press release, the Acting Secretary of Labor noted that the changes are the first in more than 15 years. The Department expects that 1.3 million more workers will be eligible for overtime under the revised rules.

The revisions are good news for employees. Though not as expansive as the 2016 proposed rules, the 2019 rules nonetheless offer an expansion of overtime coverage for employees.

Employers must take note of the changes. Employees currently considered exempt may no longer be exempt under the changes. This could mean that employers will not pay overtime to employees who should be receiving overtime. Failure to pay overtime can result in significant penalties as aggrieved employees may be entitled to actual damages, liquidated damages, and attorneys fees. The rule becomes effective on January 1, 2020 so the time for employers to do compliance checks is right now.

If you have questions about minimum wage, overtime, the FLSA, or the Department of Labor’s changes to the overtime rules, contact a Long Island employment lawyer at 631-352-0050. More information about wage and hour compliance and overtime rules can be found on our website at http://linycemploymentlaw.com. 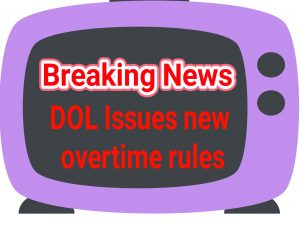