At the April 30, 2018 session of the Court, Long Island employment lawyer Matthew Weinick was admitted to the United States Supreme Court.  His admission gives Weinick the privilege of representing clients in appeals before the nation’s highest court.

At the April 30, 2018 Supreme Court session, Weinick joined a group of lawyers from Hofstra Law School for a group swearing in ceremony at the court.  Making the day all the more special, the group included Hofstra’s dean and former Chief Administrative Judge of New York, A. Gail Prudenti.  Promptly at 10:00a.m., the Court was called to order and the Chief Justice and Associate Judges of the Supreme Court took the bench.  Hofstra Professor J. Scott Colesanti read the motion to admit Weinick and the rest of the Hofstra group.  Chief Justice John Roberts granted the motion.  Before the conclusion of the session, the Clerk of the Court Scott S. Harris read the lawyers their oath and the newest members of the Supreme Court bar were sworn in.

Following the ceremony, the group was escorted to the lawyers’ lounge.  Justice Ruth Bader Ginsburg stopped in to share some stories with the lawyers and their guests, then the Court’s photographer took a group picture.

On his admission, Weinick states that the opportunity to join the ranks of the Supreme Court bar is truly an honor.  Weinick notes further, “The privilege to practice law at the Supreme Court also represents an extension of our service to our clients at Famighetti & Weinick PLLC.  We can now represent clients at all levels, from the lowest level trial courts all the way up to the Supreme Court, the highest court in the nation.”

For more information about appeals, the Supreme Court, or employment law, contact a Long Island employment lawyer at Famighett & Weinick PLLC.  Our phone number is 631-352-0050 and our website is https://www.linycemploymentlaw.com. 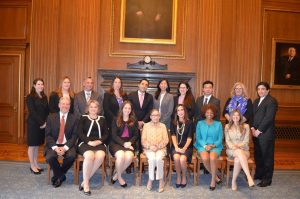 Justice Ruth Bader Ginsburg with employment lawyer Matthew Weinick and the other lawyers admitted to the Supreme Court on April 30, 2018