Firm Celebrates a Decade of Selections by Super Lawyers Magazine

In 2012, Super Lawyers magazine first selected Weinick for its “Rising Star” list. The Rising Star list is reserved for lawyers who have been practicing for less than 10 years or who are under 40 years old. Super Lawyers’ patented selection process results in just 2.5% of the lawyers in the state being selected for inclusion. Weinick made the cut for inclusion on each list from 2012 to 2018.

By 2019, Super Lawyers added Weinick to its list of “Super Lawyers.” Using a similar selection process, just 5% of the lawyers in the state are selected to be listed as Super Lawyers. Weinick remained on the Super Lawyers list through 2022, marking this as the 10th year Weinick has been included in Super Lawyers magazine’s ranking of New York metro area lawyers.

Famighetti made his debut directly to the Super Lawyers list in 2014 and has remained on the list ever since. Thus, 2022 is the 8th consecutive year that Super Lawyers has listed Famighetti. As noted by Super Lawyers, Famighetti gained this recognition based on “professional achievement, peer recognition, and other distinguishing criteria.”

On his milestone selection, Weinick commented, “the primary focus of my work is to achieve great results for my clients, but of course, I’m very excited to also have been recognized by Super Lawyers over the past 10 years.” Weinick noted further that hitting the 10 year mark is not reason to “take it easy,” but rather is a reminder to make sure that he is “ready to prove his worthiness of recognition over the next 10 years and beyond.”

Famighetti similarly noted, “I work first and foremost for my clients, but professional recognitions such as the Super Lawyers nomination, are an added bonus.” Famighetti looks forward to building on the skills and knowledge which led to his eight Super Lawyers nominations adding, “I can’t be content to rely on the status quo. I have to build on the successes that I’ve achieved and I intend to do so.”

In addition to the Super Lawyers announcement, Famighetti & Weinick PLLC is proud to announce the firm’s expansion of its practice areas. F&W is now providing mediation services, meaning the firm is available to provide a neutral mediator for dispute resolution services.

Mediation is an informal way to resolve disputes, including disputes which have escalated to lawsuits in court. More and more frequently, parties involved in a legal dispute are turning to mediation as a way to quickly and inexpensively resolve the dispute. In fact, even in instances when a lawsuit has been started, judges will often order the parties to try mediation early on in the case, to avoid the time and expense associated with drawn out litigation in court.

Though both Famighetti and Weinick have more than three decades of collective experience as advocates for parties in mediation, partner Matt Weinick is heading the mediation services practice area. The opening comes after years of preparation, planning, and work. Indeed, in 2019, Weinick underwent an intensive week long classroom training session which combined lecture with interactive skills sessions with role playing practice mediations. The training course is approved by the New York State court system.

In addition, Weinick was competitively selected for, and is participating in, an “incubator” program which is preparing him for nomination to the United States District Court, Eastern District of New York’s mediation panel. The program trains Weinick specifically to mediate federal cases filed in the Eastern District of New York. The program requires, among other things, that Weinick participate in mediating real cases pending in the EDNY. As he nears completion of the program, Weinick anticipates being sworn in to the mediator panel by a federal magistrate judge in early November.

On the expansion, Weinick said, “I really enjoy representing clients, but in some ways, helping both parties to a dispute find a reasonable compromise and a way out of their dispute, can be even more gratifying than arguing for just one client’s position.” Weinick continued, “Offering mediation services is really a way for the firm to help more people and to be a part of the future of dispute resolution.”

Having represented both plaintiffs and defendants throughout his career, this background distinguishes Weinick from many other mediators who typically spend careers representing only one side. On this characteristic, one senior mediator has described Weinick as having “a balanced perspective that is sometimes sorely missing among neutrals.”

F&W is proud of these momentous achievements. To remain up to date on the firm’s news and to receive alerts about our blogs which discuss developments in employment law, be sure to like or follow our Facebook or Linkedin pages. 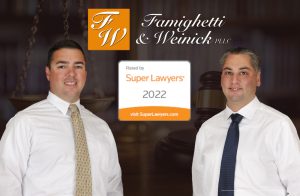