Thalia was selected as a finalist for the position after a marathon 3.5 hours of interviewing roughly 10 law students at Hofstra’s March job fair. Under such competitive and grueling conditions, firm partner, Matt Weinick, was impressed with Thalia’s preparedness for the interview and thoughtful answers to interview questions.

After the initial round at Hofstra, Thalia was invited to the employment law firm’s Melville offices to interview at a second round of interviews with partner, Peter Famighetti. Peter took note of Thalia’s strong writing sample and eagerness to learn. Both partners were impressed with Thalia’s background and demonstrated commitment to helping society’s less fortunate. The firm happily extended an offer to Thalia, which she accepted.

In addition to the hands on work, the firm hopes the internship will provide Thalia with learning experiences she could not obtain in law school. In fact, the firm has two trials on the calendar for late spring and is hopeful that Thalia will be an integral part in learning and helping with those trials.

Thalia brings with her a proven track record of taking on challenges and service to others. Thalia volunteered with The Retreat, Inc., where she worked with domestic violence victims, assisting with orders of protection, and child support and visitation issues. While a student at St. John’s University, Thalia took time away from her studies to prepare and deliver food and clothing to the homeless and to day laborers. Thalia also has experience interning with the Suffolk County District Attorney’s Office and working for a solo law practitioner assisting with immigration and criminal matters.

In sum, Thalia’s dedication to serving those who are less fortunate and disadvantaged in her community is sure to add to the level of service Famighetti & Weinick provides to its clients. 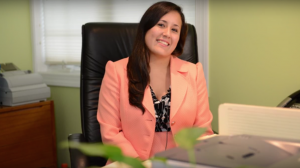