On April 10, 2019, the South Huntington Water District sent a letter to Juliet Irving. The Water District had been providing health insurance benefits to Irving as the surviving enrollee on a deceased employee’s insurance policy. The letter indicated the District would be revoking Irving’s health insurance coverage. Then, Irving hired Long Island employment lawyers Famighetti & Weinick PLLC who took the District to court and won a decision prohibiting the District from revoking the insurance. Today’s Long Island employment law blog discusses the case.

The foregoing is taken from the Court’s decision.

Irving had been a domestic partner of a District employee. Though they were not married, they considered themselves life partners. The employee received health insurance benefits from the District. The employee added Irving to his plan based on his understanding that the District participated in the New York State Health Insurance Program’s domestic partner coverage.

In 2005, the employee passed away from illness. Upon his death, Irving’s health insurance coverage converted to a survivor’s benefit. She relied on and used the insurance for the next 14 years without incident, until the District notified her that it was revoking the insurance in the spring of 2019.

Leading the case, F&W partner Matt Weinick filed an Article 78 proceeding in Suffolk County Supreme Court. An Article 78 is a special proceeding used to challenge the decision of a body, such as the municipality’s decision here. Article 78s are notoriously difficult to win because of their remarkably high standard, requiring petitioners to show that the decision at issue is arbitrary and capricious.

In response the District argued primarily that it never lawfully adopted the domestic partner coverage option for its employees. It argued that it could not find any record of the District passing a resolution adopting the coverage, so without such a resolution, the coverage could not legally be applied. But, in further Court filings and a Court conference to discuss the issue, Weinick showed that the District submitted at least three different forms to the Civil Service Commission confirming its participation in the domestic partner program.

Justice Quinlan showed little patience for the District’s arguments. The Judge wrote plainly that, “the District does not even attempt to offer a rational basis for its determination to rescind petitioner’s health insurance benefits.” The Court relied on the three forms the District submitted to the State confirmed its participation in the program as evidence that the District indeed participated in the program.

Moreover, Justice Quinlan was persuaded of the arbitrary and capricious treatment of Irving, as compared to the other domestic partner who retained health insurance coverage. The Court found “no explanation was given for this inconsistency.” In sum, the Court found that “the District’s unilateral decision to terminate petitioner’s health insurance benefits was arbitrary and capricious.”

In addition, the Court determined that revoking the insurance coverage, after Irving enjoyed its uninterrupted use for more than twenty years, would cause a manifest injustice. Invoking the doctrine of estoppel, the Court held that it would be inequitable to terminate Irving’s health insurance, even if it were originally provided as a mistake. Thus, the Court ordered that the District is “enjoined from terminating petitioner’s health care benefits and coverage.”

The decision is a wonderful victory for the firm’s client and we’re so proud to share this story.

If you have questions about Article 78 proceedings or arbitrary and capricious conduct, contact a Long Island employment lawyer at Famighetti & Weinick, PLLC. Our employment attorneys are available by telephone at 631-352-0050. 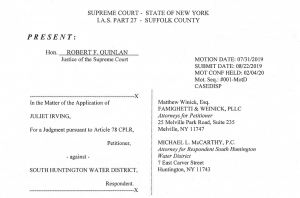