Title VII of the Civil Rights Act of 1964 prohibits employers from discriminating against employees on the basis of religion. On the other hand, the First Amendment prohibits Congress from enacting laws which interfere with how churches govern themselves. When a church makes an employment decision based on religion which negatively impacts one of its employees, does that church then violate the anti-discrimination provisions of Title VII? Today’s Long Island employment law blog explores the ministerial exception as elaborated on by the Supreme Court of the United States in the Our Lady of Guadalupe decision.

In 2012, the Supreme Court decided a case, Hosanna-Tabor. In that case, the country’s highest court applied a legal doctrine called the ministerial exception. The ministerial exception generally says that church employees who perform jobs which relate to religious responsibilities are exempt from coverage under anti-discrimination laws. For example, if a Catholic school teacher was responsible for teaching students math, but was also responsible for teaching bible studies, the teacher would likely not be protected by anti-discrimination laws because of the ministerial exemption. So, if the teacher was not married, but became pregnant, the church could lawfully terminate the teacher if it believes the teacher violated religious tenets.

Turning to the Our Lady of Guadalupe case, the decision concerns two cases which were heard and decided at the same time. In both cases, the plaintiffs were teachers at religious schools who had employment contracts with the school. Each teacher taught general elementary education classes, but both plaintiffs were charged with providing some religious instruction and leading prayer. Ultimately, each school terminated the respective teacher. One teacher alleged age discrimination, the other alleged disability discrimination. After the parties litigated whether the ministerial exception barred the claims, the cases reached the Supreme Court.

But, how courts determine which employees are central to the church’s mission and thus fall under the ministerial exception is the issue considered by the Our Lady of Guadalupe case. The court summarized by noting that the employee’s job duties were most important.

Applying the rule to the cases before it, the Supreme Court noted that in both cases, the teachers both “vital” religious duties. They provided instruction in all areas, including religion. Moreover, they were responsible for showing students how to live life in accordance with their faith. The court easily concluded that both teachers fall into the ministerial exception.

The court further rejected the rigid approach applied by the lower courts and the dissent. Instead, the majority held that courts must consider all relevant circumstances to determine whether the ministerial exception applies.

Title VII, the ADEA, and the ADA, among other statutes, prohibit employment discrimination. When statutes conflict with the constitution, the constitution prevails. Because the First Amendment guarantees freedom to churches to govern their internal workings without interference from the government, anti-discrimination statutes do not apply to churches in some employment matters. 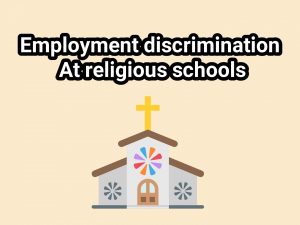