Federal immigration law makes it unlawful for an employer to hire an alien “knowing” that the individual is not unauthorized to work in the United States.  But, federal law does not prohibit the employment of illegal aliens.

When hiring employees, immigration law requires employers to attest that they have verified the employee is not an unauthorized alien on form I-9.  To do so, employers must review approved documents such as a passport.  Failure to follow this verification law may result in civil and criminal penalties.  Per the law, employers should make and retain copies of the I-9 and the supporting documents provided by the employee.

The immigration law does not impose duties solely on the employer.  The employee must also complete the I-9 and must similarly attest their authorization to work in the country.  Further, the employee must attest to their personal information, including name, address, date of birth, social security number, and telephone number.  Although the law criminalizes falsifying information on an I-9 or providing fraudulent documents concerning the I-9, the law does not criminalize an individual working without authorization.  Indeed, in circumstances where an illegal alien works in the United States and the employer violates wage and hour laws by improperly paying the illegal alien, the employer is nonetheless liable for damages and the employee may sue to recover owed unpaid wages and overtime.

Kansas v. Garcia concerns a Kansas state law.  The Kansas law criminalizes the using of personal identifying information which belongs to another person with intent to defraud someone for a personal benefit.  Kansas courts understand that the statute covers using another person’s social security number to obtain the benefit of employment.

Before their trials, each individual argued that the Kansas criminal statute was preempted by the federal immigration laws.  For simplicity, preemption means that, since federal laws are the supreme laws of the land per the Constitution’s supremacy clause, states cannot enact laws which conflict with federal laws. Thus, if the Kansas law conflicted with federal immigration law, the Kansas law could not stand as constitutional and the individuals could not be convicted.

After the issue wound its way through the Kansas state courts, the issue came before the United States Supreme Court. Writing for the majority, Justice Alito reviewed the law concerning how the court should determine the question of preemption. The precise details of this legal analysis are necessary for purposes of our employment law blog, but Justice Alito determined that the Kansas law was (1) not expressly preempted by federal law, meaning the federal immigration laws did not expressly state they were preempting state laws; and (2) not preempted by implication, meaning Congress did not intend to so comprehensively legislate an area of law which left no room for further regulation by the state.

In sum, the Supreme Court determined that the Kansas law was not preempted and was thus constitutional.

Notably, the “liberal” justices of the court dissented to the part of the majority’s decision concerning preemption by implication.  The justices argued that the immigration laws “structure, context, and purpose,” showed that Congress intended the law to control the area of policing fraud related to showing an individual’s authorization to work in the country.

What are the implications of the Garcia decision? First and foremost, Garcia confirms the long standing principle that the act of working unlawfully in the country is not criminal. This is an important reminder as employers continue to try to exploit the availability of undocumented workers by working them long hours while refusing to pay them in accordance with minimum wage and overtime laws.

But, Garcia opens the door to further efforts by states to enforce laws against undocumented workers, which may not have been enacted with the intent to target illegal aliens.  These efforts may further inhibit undocumented workers from seeking to their rights to be paid lawful wages when employers similarly violate immigration laws by employing workers not authorized to work in the country.

If you have questions about the intersection of employment laws with other areas of the law such as immigration law and criminal law, contact a Long Island employment lawyer by phone or email.  Our number is 631-352-0050 and our e-mail contact form is available at https://www.linycemploymentlaw.com/contact-us.html. 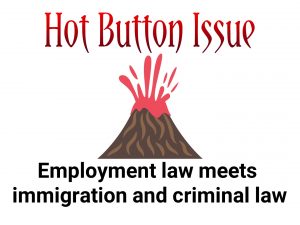