The lawsuit alleges that the female volunteer firefighter is currently the only female in the department. Unlike her male counterparts, the female firefighter alleged that she was treated differently by being subject to unwarranted scrutiny over work on department committees. She further alleged that stipends and budgets under her control were cut to levels lower than males who had previously held her position.

After years of ongoing disparate treatment, the firefighter eventually brought her complaints to the department’s attention. After making the complaint, individuals in the department tried to oust her from her position as an officer of the department, and took other action allegedly in retaliation for her complaints. Ultimately, the fire department decided that her claims lacked merit, so she filed a charge of discrimination with the Equal Employment Opportunity Commission.

After an investigation, the EEOC determined reasonable cause existed to believe that the department had discriminated and retaliated against the firefighter in violation of Title VII. The EEOC later issued right to sue letter to the firefighter, allowing her to file her claims in federal court.

Famighetti & Weinick PLLC filed a detailed response to the fire department’s motion, on behalf of the firefighter. The firm cited to controlling legal authority showing why the claims were not barred by the statute of limitations. The firm further pointed out the reasons that the allegations were sufficient, including the fact the EEOC had already determined that the allegations were sufficient to support claims unlawful conduct under Title VII.

On March 3, 2021, federal District Judge Gary Brown heard oral argument on defendants’ motion. Employment lawyer Matt Weinick argued the case for the firefighter. After the department’s lawyers argued why dismissal should be granted, Weinick argued the firefighter’s case. Weinick emphasized the importance of the EEOC’s decision and the important role it should play in the court’s decision. Weinick also argued about the unique characteristics of Long Island volunteer fire departments, and why the conduct in this case amounted to a hostile work environment, discrimination, and retaliation.

Typically, the defendants’ motion is a preliminary matter and courts ask that the parties provide more substantive briefing after the court conference. In this case, Judge Brown ruled from the bench that he was considering the motion to dismiss fully made and argued, and that he would be denying the motion in its entirety. Thus, the case will not be dismissed, but instead, will be allowed to proceed to the next stages of the litigation process.

The judge recognized several points articulated by the firm’s arguments. First, volunteers, such as volunteer firefighters on Long Island, are considered employees for purposes of employment discrimination laws. But, the court’s decision also recognizes the importance of the continuing violation doctrine and it’s relationship to the 300 day filing rule for EEOC charges. The decision also shows the importance of a reasonable cause determination and it’s relevance to a court’s analysis about whether a discrimination lawsuit should be dismissed or not.

If you have questions about discrimination in fire departments, motions to dismiss, the EEOC, or retaliation, contact a Long Island employment lawyer at 631-352-0050. The phone number for our Hudson Valley employment law office is 845-669-0040. 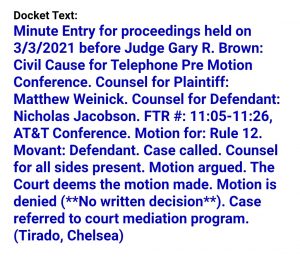