Though some vaccine mandate requirements allow for religious exemptions, this DOH rule does not provide for any religious exemption. Accordingly, a group of medical professionals sued the state seeking an order that stops the law from taking effect.

The plaintiffs argued that the state law violates the First and Fourteenth Amendments to the United States Constitution because it requires health care employers to revoke religious exemptions from Covid-19 vaccination mandates. On September 14, 2021, United States District Judge David N. Hurd granted the plaintiffs’ motion for a temporary restraining order.

There are several important caveats to the order. First, the order is merely a preliminary order which was issued without the judge having heard from the state. In other words, the judge has only heard one side of the argument. As discussed below, there is reason to believe that the vaccine mandate will ultimately be found to be constitutional.

Which leads to the second point. As a preliminary order, it means that the judge has not yet decided whether the plaintiffs are correct in arguing that the mandate is unconstitutional. Rather, the judge has only determined that there are enough reasons to delay implementation of the law, while he decides whether the law is constitutional or not.

Notably, as no requirement takes effect until September 27, the order does not practically take effect until that date. Further, the state must respond to the plaintiffs’ arguments before September 22, 2021 and then the parties must appear on September 28. Thus, it is possible that after hearing the state’s response, the judge may rescind or alter the order.

New York City has also issued a Covid-19 mandate, requiring that New York City Department of Education workers be vaccinated or be tested weekly for Covid-19. Like the state rule, the City rule requires that by September 27, workers must provide proof of an initial first dose of a vaccine, proof of full vaccination, or proof of a single dose vaccine.

City unions filed a special proceeding, i.e. Article 78 proceeding, challenging the law. The unions argued that the rule is arbitrary and capricious and unconstitutional. They asked the court to similarly implement a temporary restraining order to stop the rule from taking effect.

On September 14, 2021, State Supreme Court Justice Laurence L. Love issued an order stopping the law from taking effect, pending a further court hearing on the matter. As is the case with the federal order, Justice Love’s order is only an initial preliminary order. The order does not mean that the court agrees that the rule is unlawful, it means only that the court believes the circumstances warrant the temporary stoppage of the law taking effect, so that the court can fully consider the parties’ legal positions.

Indeed, the order provides no discussion of the legal issues presented by the case and the court has not yet considered any arguments from the City about why the rule might be constitutional.

We’ve predicted before that most state (and city) implemented vaccine mandates will be constitutional. Our prediction is based on a 1905 Supreme Court case which determined that state’s requirement that all citizens be vaccinated against smallpox does not violate the constitution. Though the current Supreme Court has offered some push back on that decision, lower courts across the country have continued to rely on the case as binding legal precedent.

But, a New York appellate court has already considered the question of whether a vaccine requirement which does not allow for a religious exemption is constitutional. Earlier this year, in March 2021, the Third Department reviewed a challenge to a New York law which required mandatory measles vaccines for public school children. Initially, the law had an exemption for religious reasons, but the legislature later repealed that part, meaning no religious exemption was allowed.

In that case, the court reviewed several constitutional challenges and determined that the requirement to vaccinate with the lack of a religious exemption was constitutional. Though the federal and state courts reviewing the current state and city Covid-19 vaccine mandates are not bound by this decision, principles of law suggest that the reasoning used by the state court, should be applied by the federal court.

Additionally, the City law provides a path for those employees who do not want the vaccine, to wit, regular testing. This is another reason to suspect the city rule will be upheld.

In sum, two courts in New York, one federal and one state, have temporarily suspended a New York State and City vaccine mandate from going into effect. Because neither case has yet heard the argument from the state and city, and because the orders are very preliminarily orders, this does not mean that the laws won’t eventually take effect. In fact, current legal precedents suggest that the laws will ultimately be found to be constitutional. However, no two legal scenarios are ever completely identical and the courts here have plenty of room to find reason to strike down the State and City laws as unconstitutional.

We’ll be following the development of these cases and we encourage readers to follow our social media to stay update on our blogs about these Covid-19 vaccine mandates. The constitutional issues here are incredibly complex and this blog should not be accepted as a detailed analysis of those legal issues. The blog should be used for informational purposes only, and not as legal advice.

For individual concerns about vaccine mandates, contact one of our employment lawyers at 631-352-0050. 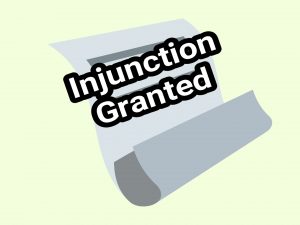