In 2010, Peter entered private practice working for employment law firms in Nassau County. In private practice, Peter represented countless employees in matters ranging from sexual harassment to hostile work environments to wrongful terminations. Peter fought for his clients’ rights in arbitrations and mediations, as well as in the federal and state courts of New York and administrative agencies such as the Equal Employment Opportunity Commission (EEOC) and New York State Division of Human Rights (NYSDHR). In addition to the employment cases, Peter handled other civil rights cases, also. For instance, Peter obtained a plaintiff’s jury verdict in case alleging violations of his client’s First Amendment free speech rights and Fourth Amendment freedom from unlawful search and seizure rights.

In 2013, Peter joined with Long Island employment lawyer Matthew Weinick to open Famighetti & Weinick, PLLC. At F&W, Peter has continued his work fighting for workplace rights. Peter proudly serves as counsel for Troop NYC and Troop L of the New York State Police Investigator’s Association, where he defends New York State Troopers in disciplinary matters. He also regularly brings claims against employers who have failed to pay their employees lawful overtime or minimum wages and he routinely handles claims of employment discrimination and retaliation. Peter is oftentimes able to resolve his claims by sending a letter to the client’s employer, but he is always prepared to take his cases to court.

Peter’s hard work has not gone unnoticed. The New York Daily News reported about a $150,000 settlement Peter obtained for his client from the City of New York and he has been quoted many times in the media about cases he has handled, including agencies such as Newsday, News 12 Long Island, CBS radio, and the New York Post. Moreover, federal judges have commented in written decisions that Peter is an “excellent attorney,” that his court submissions “were first rate and indicative of any attorney with a thorough understanding of how to draft papers and present arguments in an employment case,” and that he is an “experienced attorney . . . primarily in employment litigation.” Peter has been given a 9.2 rating by attorney review website AVVO and he was listed in Super Lawyer’s New York metro magazine for four consecutive years.

Peter’s clients have described him as “very knowledgeable,” and a “wonderful and very reliable lawyer.” Former client “Danielle” said she would “absolutely recommend Mr. Famighetti and his firm Famighetti & Weinick to anyone.”

On the personal side of Peter, he lives on Long Island with his wife and three children and loves nothing more than spending time with them. He is active with his children’s sports teams and serves as a coach for his son’s football team. He also serves as Vice-President of a local youth football league.

If you would like to speak to Long Island employment lawyer Peter Famighetti, he can be reached by phone at 631-352-0050 x 200, by email at pjf@fwlawpllc.com, or by text message at 631-629-5401. His website profile is available at https://www.linycemploymentlaw.com/peter-j-famighetti. 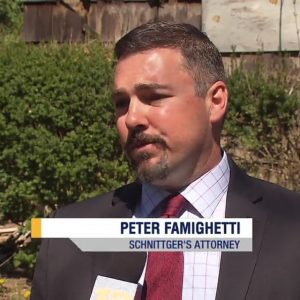