In its January 2017 edition, the Nassau Lawyer published an article written by Matthew Weinick, partner of Famighetti & Weinick, PLLC.  The article discusses how a 2016 appellate court decision expanded an important doctrine of employment liability in New York.

The Nassau Lawyer is the journal of the Nassau County Bar Association.  With the exception of a combined summer edition, the journal is published monthly and each month usually highlights a particular area or areas of law.  January highlights Labor and Employment and Immigration Laws.

Since 2014, Weinick has submitted articles to the journal which have been published each year.  This year, Weinick wrote about the Second Circuit Court of Appeals case, Vazquez v. Empress Ambulance Service, Inc., which was decided in August 2016.  The case applied the so-called “cat’s paw” theory of employment liability to find that the plaintiff’s former employer could be liable to her because her co-worker retaliated against her after she complained about his discrimination.  Weinick’s article discussed the history of the cat’s paw theory, the Second Circuit’s analysis of the theory, and the possible implications of the Court’s holding for both employers and employees.

Weinick’s article appears at page 7 and continues at page 25.  Hard copies of the journal are available at the Nassau County Bar Association, where Weinick also proudly serves as secretary of the association’s Labor and Employment Law committee.

If you have questions about the cat’s paw theory or any other employment law questions, contact the Long Island Employment Lawyers of Famighetti & Weinick, PLLC at 631-352-0050 or visit our website https://www.linycemploymentlaw.com or Facebook page. 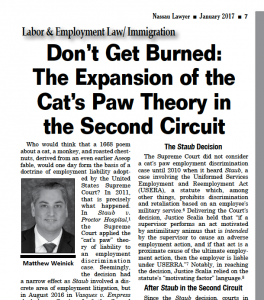