New York State is generally considered an at-will employment state. Employment at-will means that employers can fire employees for any reason or no reason at all, unless the termination would be a violation of law. Examples of violations of law include unlawful discrimination or retaliation.

But, most employees in New York are at-will and have no job protection.

Seeking to expand the class of New York employees who have job protections and who will no longer be at-will, New York City has expanded the Fair Workweek Law to require that fast food workers be fired only for “just cause.” Today’s Long Island employment law blog discusses this law.

New York City’s expansion of the Fair Workweek Law covers fast food workers who work for fast food restaurant chains with 30 or more restaurants across the country. The law requires that employers provide an initial 30 day period of probation. After the probation period, the employer may terminate the employee, reduce the employee’s work hours  by 15%, or indefinitely suspend the employee, only for just cause.

The definition of just cause is the employee is unable to satisfactorily perform the job duties or where there is misconduct which is demonstrably and materially harmful to the employer’s business interests. Before discharging the employee, the employer must provide five days notice indicating the precise reason for the termination. The factors used to determine just cause are:

The law further requires that employers use a progressive discipline model which includes a range of discipline, termination being the most serious level of discipline which should be reserved the most egregious violations.

The law does not prohibit employers from laying off workers due to economic reasons, but it imposes some requirements which businesses must follow. For example, employers must have a bona fide economic reason for the layoffs, such as changes in the company’s organization, or reductions in profit or sales.

When conducting layoffs, companies must first layoff the least senior employees. If the company reaches a position where it can re-hire employees, employers must first try to re-hire laid off employees before hiring new employees.

New York City has given the new law teeth. Violations of the Fair Workweek Law can be costly for employers who violate the law. Employees who have had their rights violated can sue the employer in court or (after January 2022), can file an arbitration with the New York City Department of Consumer Affairs. Employers found liable for violating the law may be subject to damages to the employee, including back pay and compensatory damages, and attorneys’ fees. Employers may also have to pay for the arbitration and may be ordered to reinstate the employee. 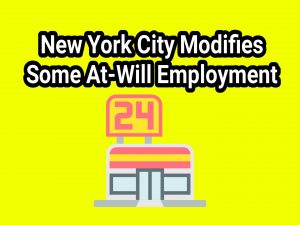