On November 21, 2017, the New York State Division of Human Rights determined that probable cause exists to believe that an employer discriminated against an employee on the basis of perceived disability.  Long Island employment lawyers Famighetti & Weinick PLLC filed the charge of discrimination against a Nassau County employer in the Spring 2017 on behalf of one of the workers.

The New York State Human Rights Law prohibits employers from discriminating against employees on the basis of the employee having a disability. Oftentimes, the question arises as to what constitutes a disability under the Human Rights Law.  Under the statute, a disability can be an actual disability which is a medical impairment which affects the exercise of a normal body function.  For example, a person with diabetes has a medical condition which affects the body’s ability to use sugar, so a person with diabetes will likely be considered disabled under the discrimination statute.

Sometimes, however, a person does not actually have a disability, but others think that the person has a disability.  For example, a person may cough a lot in the workplace due to dust or other irritants, but there is no other underlying medical condition.  The person’s supervisors, however, think the person has a respiratory disorder and they terminate the employee. In that case, the person is not actually disabled, but is nonetheless still considered disabled under the statute under the theory of “perceived disability.”  A perceived disability is when the employee’s employer thinks that a person is disabled, but the person does not in fact have a medical condition causing an impairment.

Fired Because of Perceived Disability

In May 2017, Long Island employment lawyers Famighetti & Weinick PLLC filed a charge of discrimination with the New York State Division of Human Rights, the state agency responsible for investigating claims of workplace discrimination.  The charge alleged that the worker’s employer, a Nassau County manufacturing company, discriminated against the employee on the basis of perceived disability discrimination.  Specifically, the charge alleged that the employee suffered a “syncopal episode” in the workplace, i.e. simple fainting.  The worker was hospitalized and medically evaluated for underlying conditions which could have caused the fainting.  Doctors did not find any underlying conditions and attributed the fainting episode to dehydration.

The worker returned to work, but the employer fired the employee.  The employer said he was concerned the worker had epilepsy and that his seizures would cause a danger in the workplace.

At the Division of Human Rights, F&W showed that the worker did not have epilepsy or any other seizure disorder so there was no reason the worker was a danger in the workplace.  Further, the employer’s admission that the worker was fired because the owner thought the worker had epilepsy shows that the termination was based on perceived disability and so it was illegal.

The New York State Division of Human Rights agreed with F&W.  The Division determined that the employer’s suggestion that the worker could not claim disability discrimination was “disingenuous at best.”  The Division further stated that “Had it not been for respondent’s conclusion that complainant is disabled, followed by the termination of the complainant’s employment in an alleged attempt to protect everyone, complainant would not have to file a complaint of discrimination and could have continued his employment . . . under the same terms and conditions he previously enjoyed.”

The next step will be that the Division will schedule a public hearing which is a proceeding similar to a trial. The parties will present evidence and an administrative law judge will determine whether the employer, in fact, discriminated against the worker, and if so, the amount of damages to be awarded. 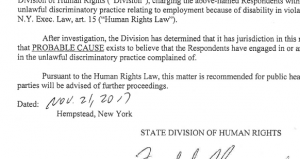