Zarda stems from an employer’s termination of a sky-diving instructor from Long Island in 2010, soon after the employee disclosed his sexual orientation. The District Court and then the Second Circuit initially ruled against the sky-diving instructor, holding that the Courts’ prior decisions interpreting Title VII required ruling that Title VII’s prohibitions do not include sexual orientation discrimination.

Since these earlier Title VII decisions, however, the sexual orientation legal landscape continued to change while Mr. Zarda (and then his estate) appealed the various court decisions which ruled against him.  Ultimately, the Zarda case was heard “en banc,” meaning that all eligible judges of the Second Circuit heard and participated in deciding the case.  This was necessary because the court was asked to consider whether to overturn its prior precedent.  For a discussion about precedent and how the federal courts work, read our Federal Judge Primer Blog.

Writing for the majority of the Second Circuit judges, Chief Judge Katzmann followed the lead of the EEOC and the Seventh Circuit and determined that Title VII prohibits discrimination based on sexual orientation.  To make this decision, Judge Katzmann relied on three different arguments: a statutory construction argument, a sex stereotype theory, and an associational theory.  Each theory is discussed below.

Sexual Orientation is a Subset of Sex

In 1978, the United States Supreme Court determined that Title VII prohibits employers from discriminating against employees based on “stereotyped impressions about the characteristics of males or females,” which has come to be called gender stereotype discrimination.  The Court reviewed the history of this law and noted the difficultly lower courts have had applying that rule to cases that come before them which assert sexual orientation and gender stereotype claims.  The Court concluded that an employer makes decisions based on gender when it acts against a male employee who is attracted to men, but does not take similar action against a female employee who is attracted to men.  Accordingly, the Court held that sexual orientation is part of gender stereotyping discrimination which is prohibited by Title VII.

Discrimination Based on Association

In 2008, the Second Circuit reviewed a case in which an employer fired a white man because he was married to a black woman.  The Court held that the termination violated Title VII because the employer took action against an employee because of that employee’s association with someone of another race.  An associational race discrimination theory was born and then adopted by appellate courts in other jurisdictions.  Applying this theory in the context of sex, Judge Katzmann concluded that employers make employment decisions based an employee’s sex when the employer, for instance, “fires a gay man based on the belief that men should not be attracted to other men.”  Accordingly, the Court determined that an associational discrimination theory of discrimination supports the conclusion that Title VII applies to sexual orientation claims.

In sum, after a lengthy discussion about statutory interpretation, and various theories of employment discrimination law, the Second Circuit reversed long standing precedent in the jurisdiction and held that Title VII prohibits sexual orientation discrimination.  Several judges wrote concurring opinions, noting for various reasons, that they were joining in only part of the majority’s decision.  Also, as discussed below, several judges dissented.

While the legal landscape is shifting in favor of protecting LGBT employees, the United States Supreme Court has not yet addressed this important employment law issue. 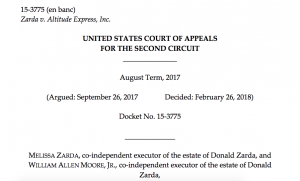