Whistleblower retaliation is perhaps one of the most misunderstood employment law claims in New York. Many employees believe a broad whistleblower law protects a variety of employee conduct and that when employees complain about any number of workplace issues, they are automatically protected against retaliation by the employer.

Under the existing New York whistleblower law, workers in New York were protected against retaliation by employers when employees engaged in certain protected acts. To invoke the protections of the act, employees had to have disclosed an illegal activity of the employer. Further, it was not enough that the employer just engaged in unlawful activity. The violation must have threatened the health or safety of the public or constitute healthcare fraud. In other words, the law’s coverage was remarkably limited.

In addition, the law more broadly defines the types of laws which employees can allege an employer is violating. The amendments clarify that executive orders, court decisions, and administrative agency decisions or rulings, are all within the definition of a “law, rule, or regulation.”

Under traditional understandings of the term retaliation, only certain employment actions were deemed retaliatory. For instance, terminations and demotions have clearly been legally recognized as retaliatory acts. But other acts, such as an employer speaking poorly about a former employee, may not have been recognized as retaliatory. Under the changes coming in 2022, the whistleblower expands the definition of retaliatory acts to prohibit employers from acting in ways which may harm a former employee’s prospects for future employment and from reporting an employee or his or her family to immigration officials.

Other changes include that the statute of limitations has been increased from one year to two years. Also, whereas damages were limited in the previous version of the law, the changes make available punitive damages, front pay, and civil penalties of up to $10,000. Finally, employers must post notice of employees’ rights under the law.

Whisteblower protections in New York are one of the most commonly misunderstood areas of employment law. Prior to 2022, New York’s whistleblower law was notoriously limited in scope and covered only particular activities. The 2022 changes will expand New York’s whisteblower protections in important ways. Limitations remain though which why it is important to speak to an experienced employment law attorney if you believe your employer is violating a law.

The employment lawyers at Famighetti & Weinick PLLC are experienced in handling a variety of employment retaliation matters. Laws such as Title VII and the New York State Human Rights law also provide retaliation protection. If you are concerned about an employer violating a law or if you believe you have been retaliated against at work, speak to one of our retaliation lawyers at (631) 352-0050, or in the Hudson Valley at (845) 669-0040. 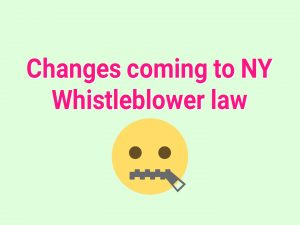