On February 22, 2022, New York State Supreme Court Justice Wilma Guzman issued an order reinstating a terminated doctor to the residency program he had been accepted into. The hospital had previously accused the doctor of failing a drug test and terminated him. Employment lawyers Famighetti & Weinick PLLC challenged the hospital’s decision in an Article 78 proceeding and prevailed. Today’s Long Island employment law blog discusses the case.

The following facts are taken from publicly available documents in the matter of Papadas v. City of New York and Jacobi Hospital.

In this case, F&W’s client was a Greek citizen who had applied for a medical residency program in the United States. To be placed in a residency program, doctors apply via a national program which matches residents with hospitals. In other words, doctors don’t apply to individual hospitals, but rather participate in a placement program.

After the doctor started the residency program, the hospital sent him for a drug test. The doctor understood that as a condition of employment, he would have to take the drug test. After he took the test, he was informed that the test was positive. Later, the doctor discussed with health services that his Greek diet included eating seeded breads, such as poppy seeds, which could account for the alleged positive result. At that time, the doctor saw that his name was not spelled correctly on the drug test report.

The hospital sent the doctor for another drug test. This time, the hospital alleged the sample did not meet temperature requirements, and flushed the sample down the toilet without testing it.

Ultimately, the hospital fired the doctor based on the initial alleged failed drug test. Without his employment at the hospital, the doctor faced being deported.

Then, the doctor hired employment lawyers Famighetti & Weinick. After brief attempts to negotiate a settlement without the need for court intervention, it became apparent that more aggressive efforts were needed. F&W filed a petition under Article 78 of the CPLR. Further, F&W filed an order to show cause, seeking an emergency temporary restraining order which would immediately reinstate the doctor.

Within a day, the Court signed the Order with the TRO, which reinstated the doctor. The Court further ordered that a hearing would be held to decide the ultimate outcome of the case.

On November 4 and 5, 2021, the Court held the hearing. For F&W, employment lawyer Matt Weinick handled the hearing. Weinick gave the opening statement, took the direct examination of the doctor, cross examined the hospital’s two witnesses, and delivered the closing argument.

On February 22, 2022, Justice Guzman delivered her decision. Among the findings, the Court noted that the hospital “grossly” misspelled the doctor’s name on the initial drug test results. The judge noted that such a mistake created doubt about the chain of custody and showed a “sloppiness” in lab procedures. This, the Court found, showed “implicit and explicit bias.”

The Court noted additional problems with the testing. Although the hospital’s chief medical officer testified that the sample must be signed for by a lab technician, the doctor’s sample did not have such a signature. The Court was troubled that the hospital did not produce a witness who could explain these procedural irregularities, and the chief medical officer continued to call the doctor by an incorrect name throughout the hearing.

Moreover, the Court noted problems with the second test, as well. The Court determined that the hospital did not abide by its testing procedures when a sample does not meet temperature requirements. The hospital was supposed to collect a second sample and send both samples for testing, but it did not do so here. The Court explicitly held that the hospital’s failure to follow the procedures for this second test was the “definition of arbitrary.”

In sum, the Court’s conclusion of law was that the hospital’s conduct was arbitrary and capricious, the standard of review for an Article 78 proceeding such as this. In other words, F&W proved the doctor’s case. The Court wrote further that, “It shocks the conscious of this how illogically and unfairly this situation was handled in its entirety.”

The Court then granted all the relief requested in the petition, including back pay, reinstatement, attorneys’ fees, and an annulment of the termination decision. In other words, the decision is essentially a complete victory. The doctor can continue to work and live in the United States and can continue the residency program at the hospital.

For questions about Article 78 proceedings, false positive drug tests in employment, or arbitrary and capricious conduct, contact a New York employment lawyer at Famighetti & Weinick PLLC. Our employment lawyers are available by phone 631-352-0050. More information is available on our website at http://linycemploymentlaw.com. 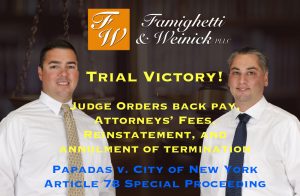