On April 25, 2018, Long Island civil rights lawyer Matthew Weinick led a discussion about First and Second Amendment rights at a meeting of the League of Women Voters.  The meeting, held at the Levittown Library, was well attended by both organization members and the general public.

According to its website, the League of Women Voters is a “grassroots organization.”  Earlier this year, the group contacted the Nassau County Bar Association looking for a volunteer lawyer to speak about civil rights.  Civil rights lawyer and bar association member Matthew Weinick responded to the request and the discussion was scheduled.

At the meeting, Weinick discussed First Amendment and Second Amendment rights.  Weinick tried to keep these hot button issues away from politics and spoke about these rights from a legal viewpoint, discussing the way courts have interpreted the amendments.  Weinick used recent court decisions relating to sexual orientation discrimination and gun regulation to show how courts interpret the Constitution.

For the First Amendment, Weinick concentrated the discussion on free speech rights.  Weinick talked about the words of the amendment itself which state only that “Congress shall make no law . . . abridging the freedom of speech.”  From that language, there are now volumes of law interpreting those few words.  Further, Weinick showed that although the First Amendment uses the words “shall make no law,” there are nonetheless many lawful restrictions on speech. Weinick made the point that the Constitution and its amendments are written broadly and it’s the job of the courts to interpret that broad language.

Turning to the Second Amendment, Weinick discussed the recent Heller decision which looked at a handgun regulation from Washington D.C.  Weinick started the conversation by again turning to the language of the amendment and asking attendees what they think those words mean.  Weinick then talked about how Heller established Second Amendment rights as individual rights then he shared statements written by Justice Scalia which suggests that the Second Amendment rights are not unlimited and are subject to regulation and limitation like many other Constitutional rights.

On that point, Weinick compared the First Amendment with the Second Amendment and showed that like all restrictions on speech which were discussed for free speech rights, Second Amendment rights were similarly subject to some restrictions.  These opening remarks and comparisons led to a lively discussion and question and answer period in which the attendees were actively engaged.

Weinick says he was privileged to have the opportunity to speak before such an important and historic civic group. He was pleased that the group was so engaged and seemed genuinely interested in the discussion.  Weinick further thanks the Nassau County Bar Association for arranging the meeting and for providing the opportunity for its members to speak about topics which interest them. 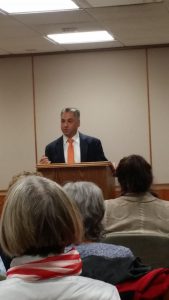