Mediation is an informal way for parties to a dispute to work towards a negotiated settlement, instead of having a judge or jury decide the outcome. Advantages to mediation include that it is often quicker and less expensive than a lawsuit, and the parties control the outcome of the case, instead of a court. Because of the efficiencies of mediation, courts such as the EDNY, often order parties to try mediation before the case continues in court.

The path towards Weinick joining the EDNY mediation panel started many years ago. Weinick first applied for and was accepted to the EDNY’s pro bono mediation advocacy panel. On the advocacy panel, Weinick represented parties involved in lawsuits filed in the Eastern District of New York. The EDNY, as it is known, has jurisdiction over federal lawsuits arising in Staten Island, Brooklyn, Queens, Nassau, and Suffolk counties.

The advocacy panel provides lawyers to parties who could not afford to pay an attorney. The panel’s pro bono lawyers enter the case for the limited purpose of helping the party at a court ordered mediation session. Weinick accepted many assignments from the program and his success in helping clients reach a resolution was noted by program administrators.

In 2021, Weinick applied to the EDNY mediator incubator program. According to the EDNY, the program was designed as a mentorship program for attorneys with a “substantiated interest in mediating federal cases.” Minimum requirements for the program include at least five years of experience as an attorney and at least 24 hours of mediator training. After interviewing with the EDNY’s advisory council, Weinick was notified of his acceptance to the program.

The incubator program officially began in early 2022. The program involved some additional initial training and an orientation to the program. Weinick, and other the other program participants, observed a series of federal mediations, then co-mediated additional real life mediation sessions for cases pending in the court. Throughout the program, Weinick was evaluated and mentored, to ensure he met the EDNY’s standards and requirements for ultimate acceptance to the panel.

Having completed all prerequisites in early fall 2022, on November 2, 2022, Magistrate Judge Levy swore in Weinick, and two other candidates who also completed the program. Judge Levy not only serves as a magistrate judge for the EDNY, but he is also the judicial director of the district’s Alternative Dispute Resolution Programs. The ceremony was also attended by individuals instrumental in the program and in helping the candidates reach the “finish line.”

After introductory remarks by Judge Levy and others, and then comments by each candidate, Weinick and the other candidates took the judicial oath, affirming among other things, to administer justice without respect to person, and to do equal right to the poor and to the rich.  The oath also included an affirmation that Weinick would impartially discharge and perform all the duties incumbent upon him under the Constitution and laws of the United States.

Weinick now joins the ranks of the esteemed list of attorneys who comprise the EDNY mediator panel. As a member of the panel, parties to lawsuits in the EDNY who are referred or ordered to EDNY mediation, may select Weinick as a the mediator. Of course, Weinick remains available for private mediation, as well. 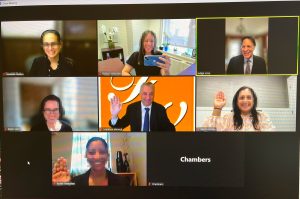