Weinick’s article is titled “Recent Discovery Reforms in Employment Litigation.”  It discusses the Southern District of New York’s implementation of standard discovery protocols in most employment cases.  Weinick reviewed the history of the program, its requirements, and some practical considerations for practitioners.  Weinick also discussed some changes to discovery made by a couple of individual judges in the Eastern District’s Long Island Courthouse.

The article also discusses mandatory mediation programs used by the SDNY.  Weinick gathered statistical evidence showing the effectiveness of the mediation program for employment discrimination cases and detailed the program’s advance into unpaid wage and overtime cases brought under the FLSA.

In addition to his article, in her monthly column, association president Martha Krisel mentioned Weinick’s involvement in a continuing education class presented at the association in February.  Krisel noted that the “Who Wants to Be an Employment Law Millionare” program was described as “hysterically funny” by attendees.

The April 2017 edition of Nassau Lawyer is available here.  Weinick’s article is at page 9 and Krisel’s column is at page 4.

If you have questions about mediation, discovery, employment discrimination, or unpaid wages or overtime, contact the employment lawyers on Long Island of Famighetti & Weinick, PLLC at 631-352-0050. We are available on the internet at https://www.linycemploymentlaw.com or Facebook. 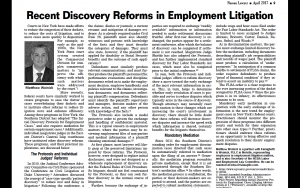