For federal workplace discrimination claims in New York, employees must file a charge of discrimination with the EEOC within 300 days of the discriminatory act in order to preserve their right to sue the employer. But, oftentimes for hostile work environment claims, the employee doesn’t reach a breaking point until after enduring perhaps months or years of abuse. Does the employee lose the right to sue based on acts which occurred before the 300 day filing period? On April 8, 2019, New York’s federal appellate court answered that question, and clarified several other important points of law concerning employment cases.  Today’s Long Island employment law blog explains.

In Davis-Garett v. Urban Outfitters and Anthropologie, the plaintiff alleged she was subjected to a hostile work environment at three different store locations and over the course of more than a year, ending in September 2013.  But, the plaintiff did not file a charge of discrimination with the EEOC until December 2013. The trial court ruled that the everything that happened from before 300 days before the EEOC charge was filed, would not be considered.

On appeal, the Second Circuit Court of Appeals held that, based on Supreme Court precedent, if at least one hostile act takes place within the 300 day period, then other acts which happened outside the 300 days remains actionable, meaning an employee can sue based on that conduct. Further, the Second Circuit emphasized that acts from outside the limitations period can also be used as background evidence to support a timely claim.  Based on these holdings, the appellate court ruled that all of the conduct which plaintiff alleged constituted a hostile work environment was timely for statute of limitations purposes.

The Court made one other observation in the decision concerning the standard for summary judgment motions.  Typically at the end of discovery for an employment lawsuit, a defendant will make a motion for summary judgment. In a summary judgment motion, the defendant basically asks the judge to dismiss the case because the plaintiff’s evidence cannot establish discrimination or retaliation. For these types of motions, courts must view the evidence in a favorable light for the employee. In plain English, if the employer and employee provide contradicting evidence, the court must believe the employee’s evidence.

In Davis-Garett, the Second Circuit hammered home the point that courts cannot make credibility determinations so the trial court was compelled to believe the employee’s sworn statements about what happened to her. Moreover, for hostile work environment claims, trial courts must review the workplace conditions in totality and not piecemeal.  Further, when viewing comments in the context of the workplace as a whole, some comments which may appear neutral and non-discriminatory, may then be viewed as discriminatory, such as neutral seeming comments.

In sum, in Davis-Garett, the Second Circuit Court of Appeals decided three important issues concerning workplace discrimination and retaliation claims in New York. First, acts which happened outside the 300 day statute of limitations period can be used to support a hostile work environment claim and can also be used as evidence of discrimination. Second, adverse actions for retaliation claims have a lower standard than adverse actions for discrimination claims. Third, when reviewing summary judgment motions in employment cases, trial courts must credit the employee’s evidence and view that evidence in its totality and not piecemeal. 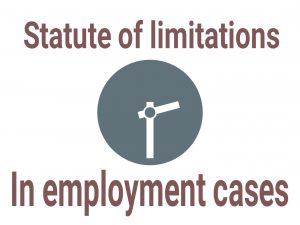 Statute of limitations in employment cases