As states across the country, including New York, make the medical use of marijuana legal, new issues are arising in the context of employment. For example, how will employers which require drug testing, respond to the changes in the law and how they will handle employees who are lawfully taking medical marijuana? Few courts have addressed these issues.

The following facts were taken from the Division’s decision. F&W’s client applied for a job with a national consumer electronics retail company. The applicant interviewed for the position at his local Long Island retail location. Soon after, the store issued the client a conditional offer of employment, subject to a background test and drug test.

Accordingly, the client took a drug test with a third-party vendor. The test returned a positive result for THC, the active ingredient in marijuana. In response, the client provided to the vendor a copy of his medical marijuana card and noted his use was legal. The vendor relayed this information, including the positive result and the medical marijuana card, to the corporate human resources office.

Ultimately, the Company rescinded the job offer. After the client inquired about the reason, he was told it was because of the failed drug test. The client again informed the company about his status as a prescribed medical marijuana user, but the Company did not alter its no hire position.

With the assistance of F&W, a charge of discrimination was filed with the Long Island office of the New York State Division of Human Rights. The charge alleged that the company violated the New York State Human Rights Law. Specifically, the charge alleged that the client’s prescribed medical marijuana card qualified him as disabled under the Human Rights Law. Further, he alleged that when the Company refused to hire him based on his lawful use of medical marijuana, it discriminated against him on the basis of his disability.

The State Division investigated the charge, interviewing the client and a company representative. At the completion of the investigation, the Division’s Regional Director made a determination that probable cause exists to support the complaint’s allegations.

Specifically, the Division determined that New York’s medical marijuana law, the Compassionate Care Act, modified the Human Rights Law’s definition of being disabled. Certified patients, i.e. individuals who are prescribed medical marijuana, are deemed disabled under the Human Rights Law. This was a crucial finding because only individuals deemed disabled under the law are protected by the disability discrimination law.

The Division further determined that the law prohibits employers from terminating or refusing to employ individuals based on their status as certified medical marijuana users and must reasonably accommodate such employees. The Division explicitly found that the company was in violation of the Compassionate Care Act.

But, the Division made an additional finding. The Division determined that the company “created a natural bias,” by expecting that applicants should be the one to identify disabilities to the employer and did not provide any mechanism to allow applicants to disclose their disabilities without feeling anxiety about being stereotyped.

In lights of its findings, the case will be assigned to an administrative law judge who will conduct a hearing to make the ultimate finding of discrimination and damages. 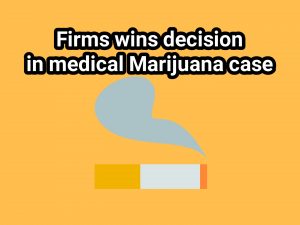