The case Montero v. Yonkers involves a City of Yonkers police officer, Raymond Montero.  Montero filed a federal lawsuit alleging his First Amendment rights were violated.  In his lawsuit, Montero alleged that he was elected vice-president of the PBA, the union in place for the Yonkers Police Department.  One of the defendants, also a Yonkers police officer, Keith Olson, was elected president.  According to Montero, Olson opposed Montero’s candidacy for the vice president position.

Montero alleged that after he made these comments at union meetings, Olson and other police officers acting at Olson’s direction retaliated against Montero.  For example, he alleges he was wrongfully investigated, denied overtime pay, transferred, and lost pay.

Based on these facts, Montero filed a First Amendment retaliation case in the Southern District of New York.  The Court, however, dismissed all of the claims.  The judge held that Montero’s actions were not protected by the First Amendment because he was not speaking as a private citizen.  The court relied on the Supreme Court case Garcetti v. Ceballos.  Montero appealed the dismissal to the United States Second Circuit Court of Appeals.

On May 16, 2018, the Second Circuit issued its decision.  The court reaffirmed the principle that public employees are indeed entitled to some protection from the First Amendment.  But, not all speech made a public sector employee is entitled to protection.  Rather, the public employee must be speaking as a citizen on a matter of public concern.  The Montero case hinged largely on the first part of the test which is whether Montero was speaking as a citizen.

In Montero, the court held that his comments were not part of parcel of his concerns about his ability to do his job.  The court found it persuasive that Montero was speaking as a the union vice-president noting that this was a role in which he was not required to serve as part of his job.  Moreover, the court noted that although Montero learned the information he spoke about because of his job, it was not part of his job responsibilities.  But, the Second Circuit did not adopt a broad rule as other courts have adopted which says that all speech made by an employee in his or her capacity as a union member is speech made as a private citizen.

The Montero decision is an important case about First Amendment retaliation in New York.  The case clarifies what employees must show to be protected by the First Amendment in the workplace.  The Montero case can certainly be read as an employee friendly decision. 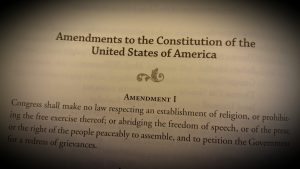