Followers of our civil rights blog will know that since the early days of the pandemic, our interpretation of existing law led us to conclude that most COVID-19 regulations, include lock downs, social distancing, and mask wearing, would be upheld by courts as constitutional. This conclusion was reached in large part by a 1905 Supreme Court decision which suggested that the Supreme Court believes the Constitution gives extreme deference to states’ policy decisions to fight disease.

Indeed, in the ensuing months of the pandemic, court after court, including the Supreme Court, continued to extend deference to the states’, when challengers sought a determination that regulation was unconstitutional. On November 25, 2020, however, SCOTUS, reconstituted as a strong conservative court, pushed back on New York’s regulations effecting houses of worship. Today’s Long Island civil rights blog discusses the case.

In Roman Catholic Diocese of Brooklyn v. Cuomo, several religious groups sued New York’s governor Cuomo, alleging recent regulations creating color coded zones based on a region’s COVID-19 outbreak, were unconstitutional. We blogged about the case when it was before New York’s federal appellate court. In brief, regions with higher outbreaks were required to comply with different regulations than regions with less significant outbreaks. The harsher regulations included which businesses could open and which must close. Further, under certain outbreak conditions, religious gatherings were limited (but not prohibited altogether). New York’s Second Circuit upheld the restrictions on religious gatherings as constitutional.

Upon reaching the Supreme Court, a different outcome resulted. In a decision with five separate opinions by the justices, SCOTUS determined that New York’s regulations were unconstitutional with respect to the restrictions placed on houses of worship. The key component’s of the decision are that the Court believes religious institutions were singled out for harsher treatment than secular businesses. For instance, the Court found that certain manufacturing facilities, and other businesses like acupuncturists, garages, and camp grounds, were not limited by a number of people that could enter those facilities. But, houses of worship were subject to occupancy restrictions.

Additionally, the Court determined that some comments made publicly by Governor Cuomo evidenced his intent to target to houses of worship.

Though the case was decided in the context of a motion for an injunction, which is subject to a different type of review than if the case was being ultimately and finally decided on the merits, this decision signals a shift in the Court’s views of COVID-19 regulations. Indeed, just months ago, SCOTUS decisions suggested the Court would continue to defer to states’ policy decisions. Now, with a new Court composition, the Court is indicating its readiness to push back on state regulations.

If you have questions about the constitutionality of COVID-19 regulations, contact a Long Island civil rights lawyer at 631-352-0050, or follow our blog by subscribing to our Facebook page. 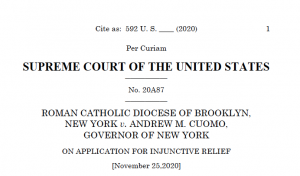 SCOTUS Pushes Back on COVID-19 regulations