UPDATE: SCOTUS HAS REVERSED THIS DECISION. SEE OUR MOST RECENT BLOG ABOUT THIS CASE.

Throughout the COVID-19 pandemic, the civil rights lawyers at Famighetti & Weinick PLLC have been closely following the lawfulness of government restrictions implemented to control the spread of the virus. From the earliest days, our video blog series, “Lockdown Video Series,” predicted that most coronavirus regulations would be declared constitutional by courts.

As the months of the pandemic lumbered along, we continued to follow developments in the law. Our June 2020 blog discussed failing legal challenges to COVID-19 regulations, and partner, Matt Weinick, published a legal article discussing the constitutionality of face mask requirements and temperature checks at work. Again, our analysis concluded that, because of the Supreme Court’s strong deference to a government’s right to control the spread of disease, most constitutional challenges would fail.

In yet another decision, New York’s federal Court of Appeals, the Second Circuit, issued a decision on November 9, 2020 holding that New York’s color coded covid zones which vary the degree to which restrictions exist in each zone, are constitutional with respect to restrictions imposed on houses of worship. Today’s Long Island civil rights blog discusses the Agudath Israel of America v. Cuomo decision.

New York’s Governor Cuomo issued an executive order concerning COVID-19 hotspots. The order creates yellow, orange, and red zones. The Department of Health is empowered to determine each zone in accordance with the severity of the coronavirus outbreak in each zone. Each zone then has a different level of restrictions within the zone.

The red zone is the most restrictive, applied to areas with the most severe outbreak. In red zones, non-essential gatherings of all sizes are prohibited, non-essential businesses must close, schools cannot instruct via in-person methods, restaurants cannot serve seated patrons, and houses of worship are limited by occupancy.

After discussing some initial procedural issues, the Appellate Court turned to the question of whether the First Amendment challenge to the executive order had merit. The Court determined that the challenge could not succeed.

So, the primary question concerning the executive order is whether the order is general and neutral with respect to religious practice, or whether the order targets religion. The majority of the Second Circuit panel determined that the executive order concerning “zones” was constitutional, notwithstanding its impact on religious practice. To reach this decision, the Court noted that the order equally impacts (or impacts to a greater degree) schools, restaurants, and comparable secular gatherings. The Court relied on Chief Justice John Roberts’ recent decision which found similar restrictions on religious gatherings to be constitutional.

A dissenting judge argued that Justice Roberts’ decision came early in the pandemic when governments were continually working to define their response to the pandemic while facts on the ground were changing. But, the majority disputed that such an argument should alter the result in Agudath because the “central facts” from May 2020 still exist today, to wit, there is no known cure or available vaccine, the pandemic has killed hundreds of thousands of Americans, and people may be infected and unknowingly infect others. Thus, the order is constitutional.

In sum, the Second Circuit again afforded deference to a state government’s plan to battle the COVID-19 pandemic. Because the executive order does not treat religious practice worse than any other conduct, the Governor’s order does not violate the First Amendment’s guarantees of freedom of religion.

If you have further questions about the constitutionality of COVID-19 mitigation efforts, please visit our Youtube channel and blog or call a New York civil rights attorney at 631-352-0050. 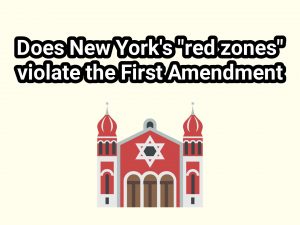