From the beginning of the coronavirus pandemic, the civil rights lawyers at Famighetti & Weinick PLLC, have predicted that constitutional challenges to  government covid-19 regulations would likely fail. Our videos and blogs have outlined some of our reasoning and earlier this month, partner Matt Weinick published an article further discussing the role of a 1905 Supreme Court case, which would likely prove fatal to most constitutional challenges.

This week, a Brooklyn federal judge again rejected another constitutional challenge, this time brought by a Long Island strip club and its owner. Today’s Long Island civil rights blog discusses the case and the judge’s decision.

Before the court was plaintiffs’ request for emergency relief, legally referred to as a temporary restraining order. On such a request, the plaintiffs are not required to prove the defendants’ violations, but must merely show that they have a likelihood of ultimately succeeding at the conclusion of the case. Notwithstanding this standard, the Judge determined that each claim was not only unlikely to succeed, but were “doomed to fail.” Each claim is discussed below.

Preliminarily, the Court noted that at least thirteen similar challenges have been brought across the country, from Florida, to Illinois, to Oregon, and that in each challenge, the government’s regulation was upheld as lawful. The judge further set the tone for evaluating such challenges, referring to the leading Supreme Court case dating back to 1905, Jacobson v. Commonwealth of Massachusetts. In Jacobson, the court held that governments may lawfully protect communities from disease and established a remarkably high standard to determine when a regulation used to combat a pandemic could be unconstitutional.

Turning to the claims, the court quickly rejected each. On the Fourth Amendment seizure claim, the Court recited law requiring a showing that the government conducted an investigation either as an employer, or as part of traditional law enforcement activities. Neither applied here so no Fourth Amendment claim could exist.

On the First Amendment claims (both analyzed the same) the Court concluded that the covid-19 regulations were content-neutral, meaning the regulations are unrelated to the content of the expression. Thus, the regulations are not subject to the highest level of constitutional scrutiny. Applying an intermediate level of scrutiny, the court determined the regulation must be narrowly tailored to serve a significant government interest. The Judge could “think of few governmental interests more pressing than protecting the public” from a deadly disease and that a sister court properly analyzed why New York’s regulations are narrowly tailored. Accordingly, the First Amendment claim was unlikely to succeed.

The Court similarly doubted the likelihood that the Fifth Amendment takings claim could succeed. Here, the Court noted that the plaintiffs voluntarily chose to not use their property in some other lawful way, such as take out food and drinks. Plaintiffs’ “voluntary” decision to close the business instead of engaging in some other lawful business could not constitute a government taking.

Similarly, for the equal protection claim, plaintiffs were required to show that the government action being challenged lacked “some” legitimate purpose. The court determined that “given the seriousness of the COVID-19 pandemic,” plaintiffs could likely not show the Governor’s orders lacked a rational basis.

In sum, this latest decision again does not foreclose the possibility that a valid constitutional argument against covid-19 mitigation regulations can be made. But, the decision reinforces that plaintiffs face an uphill battle. As we suggested when the pandemic started, the government’s interest in controlling the disease’s spread will more likely than not be a more important interest, than the impact on individual freedoms.

If you have questions about the constitutionality of covid-19 government regulations, contact a Long Island civil rights attorney at Famighetti & Weinick PLLC at 631-352-0050. 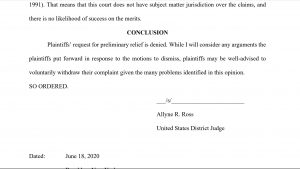