On June 15, 2020, the United States Supreme Court settled the question. In a 6-to-3 ruling, the Court held that an employer who fires an individual for being gay or transgender violates Title VII. Today’s Long Island employment law blog discusses the Bostock v. Clayton County decision.

The Bostock decision concerned three different sex discrimination cases brought under Title VII. In each case, an employer fired a long-time employee merely for being homosexual or transgender.

The first case was brought by Gerald Bostock, a man who worked as a child welfare advocate. After a decade of working for the county, Bostock joined a gay recreational softball league. Soon afterwards, the county fired Bostock. After suing, the Eleventh Circuit held that Title VII does not bar employers from discriminating against employees based on their sexual orientation.

The second case was brought by Donald Zarda, a man who worked as a skydiving instructor in New York. After several seasons, Zarda mentioned to his employer that he was gay. Again, soon afterwards, the employer fired Zarda. In Mr. Zarda’s case, however, the Second Circuit (after a re-hearing en banc), held that Title VII does bar discrimination based on sexual orientation. (Our previous blog discusses this case in detail).

Finally, the third case was brought by Aimee Stephens, a transgender woman who worked for a funeral home in Michigan. When hired, Stephens presented as a male, but after several years Stephens disclosed to her employer her decision to live and work full-time as a woman. Similarly, the employer fired Stephens soon after her disclosure. After suing, the Sixth Circuit ruled that Title VII bars discrimination based on transgender status.

With a split between the country’s appellate courts, the Supreme Court took up the issue.

Title VII states that it is “unlawful . . . for an employer to fail or refuse to hire or discharge any individual, or otherwise to discriminate against any individual with respect to his compensation, terms, conditions, or privileges of employment, because of such individual’s race, color, religion, sex, or national origin.” Writing for the majority, Justice Gorsuch determined that interpretation of the word sex, required looking at its meaning in 1964 when the law was enacted, concluding it referred only to biological distinctions between male and female.

Next, he turned to the statute’s words “because of” finding precedent defines its meaning as “by reason of” or “on account of.” Notably, Justice Gorsuch determined that this definition incorporates the “simple” and “traditional” standard of but-for causation (a but-for test directs judges to change one thing at a time and see if the outcome changes; if it does, a but-for cause exists). Based on this causation standard, Justice Gorsuch reminded courts that an employer cannot avoid liability just by citing some other factor that contributed to its challenged employment decision, so long as the employee’s sex was one but-for cause of that decision.

Further discussing the meaning of the key statutory terms, Justice Gorsuch moved to the word discriminate, finding its meaning to be “to make a difference in treatment or favor (of one as compared with others).” An employer discriminates against an employee, then, when the employer treats that employee worse than others who are similarly situated. The difference in treatment based on sex must be intentional. So, to summarize, an employer who intentionally treats an employee worse, in part, because of sex—such as by firing the employee for actions or attributes it would tolerate in an employee of another sex—discriminates against that employee in violation of Title VII.

The Court Applies These Principles to Sexual Orientation and Gender Identity

The key ruling from the majority is that “it is impossible to discriminate against a person for being homosexual or transgender without discriminating against that individual based on sex.” To illustrate the point, Justice Gorsuch examined some examples.

If an employer has two employees, both of whom are attracted to men, the two individuals are, to the employer’s mind, materially identical in all respects, except that one is a man and the other a woman. If the employer fires the male employee for no reason other than the fact he is attracted to men, the employer discriminates against him for traits or actions it tolerates in its female colleague. Put differently, the employer intentionally singles out an employee to fire based, in part, on the employee’s sex, and the affected employee’s sex is a but-for cause of the discharge. This example shows how sexual orientation, and gender identity, are inextricably bound up with sex, because to discriminate on such grounds requires an employer to intentionally treat individual employees differently because of sex.

Justice Gorsuch noted some other points relevant to LGBTQ cases, and to all employment discrimination cases. First, it is irrelevant what an employer might call its discriminatory practice, how others might label it, or what else might motivate it. When an employer fires an employee for being homosexual or transgender, it necessarily and intentionally discriminates against that individual in part because of that employee’s sex, and that is all that Title VII has ever demanded to establish liability.

Finally, an employer cannot escape liability by demonstrating that it treats males and females comparably as groups. An employer who intentionally fires an individual homosexual or transgender employee, in part, because of that individual’s sex, violates the law even if the employer is willing to subject all male and female homosexual or transgender employees to the same rule.

Not All Justices Agreed

Three justices disagreed with Justice Gorsuch’s opinion. Justice Alito, for example, wrote that the statute requires judges to consider the employer’s treatment of groups rather than individuals to see how a certain policy affects one sex as a whole versus the other as a whole (discrimination sometimes involves “the act, practice, or an instance of discriminating categorically rather than individually”). The majority pushed back on this argument, noting, the statute directly tells courts to focus on individuals, not groups.

Additionally, both Justices Alito and Kavanaugh argued that the majority was not adjudicating, but was legislating. In their view, if Congress wanted to address these issues, it would have referenced them specifically. They further suggest that, because few in 1964 expected the majority’s result, the Court should not have dared to admit that it follows “ineluctably” from the statutory text. In response, the majority said that Congress’s key drafting choices—to focus on discrimination against individuals and not merely between groups and to hold employers liable whenever sex is a but-for cause of the employee’s injuries—virtually guaranteed that unexpected applications would emerge over time.

In New York, employment discrimination based on an employee’s sexual orientation or gender identity was already unlawful pursuant to state law. 20 other states have similar laws, but in 29 states, LGBTQ employees had no protection from workplace discrimination until June 15, 2020. Thus, there is no doubt that the Bostock decision is a tremendous victory for workers’ rights and for the LGBTQ community, in particular.

If you have further questions about sexual orientation or gender identity discrimination or the Bostock decision, call one of our Long Island employment lawyers at 631-352-0050. 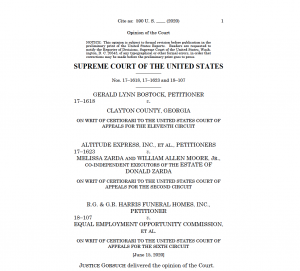