COVID-19 Update: How We Are Serving and Protecting Our Clients. Click for More Information
On the Right Side.
Your Side
Contact Us Now
For a Free Consultation

All workers in New York State, New York City, and Long Island should feel safe going to work no matter the individual’s skin color, hair texture, facial features, height, or any other physical characteristic that may be linked to an individual’s race. A rise in race discrimination has led New York City to expand its public outreach in an effort to inform vulnerable New Yorker’s about their rights in the workplace. This has also been the focus at Famighetti & Weinick PLLC. Our lawyers remain strong and fearless advocates against workplace injustices.

The chart below compares the percentage of race discrimination charges filed with the New York State Division of Human Rights during the 2016-17 FY in comparison to other types of discrimination. 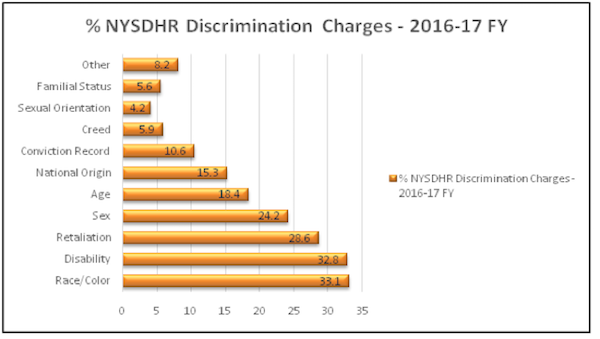 The NYSDHR is not alone in receiving a high volume of race/color discrimination complaints. The Equal Employment Opportunity Commission (EEOC), the agency responsible for enforcing federal charges of discrimination, revealed similar statistics for its 2017 FY.

According to the EEOC enforcement and litigation statistics for the 2017 FY, retaliation was the most common type of discrimination charge filed with the agency followed by race and disability. Out of the 99,109 charges the EEOC received, 28,528 of them were race discrimination charges – equaling 33.9% of all charges filed.

In addition to actions that clearly affect a job applicants or employees such as refusal to hire, termination, failure to promote, and reassignment of job duties – just to name a few – race discrimination also exists in various other forms which may be more subtle. For example, an employer’s derogatory comments, isolation, demeaning attitude, and intolerable humiliation can create a hostile work environment for employees, which is not tolerated under federal, New York State, or New York City law. Long Island race discrimination attorneys can review the particular facts of a case to determine if race discrimination exists in the workplace.

Workers are also protected from associational discrimination. This means that an employer cannot treat you differently because your spouse is of a certain race or because you are friends with someone who is a member of a particular race that your boss does not like. The mixture of an employer’s personal biases with his or her employment decisions is dangerous for employers in New York.

Don’t fight alone. The Long Island race discrimination lawyers at Famighetti & Weinick PLLC, are ready to stand on the right side, your side. Call us at (631) 352-0050 to schedule a free and confidential legal consultation.