Has an employer treated you differently than other employees because of your religion? Contact a Long Island religious discrimination lawyer at Famighetti & Weinick PLLC to discuss your case.

Discrimination based on an employee's religion is illegal under federal, New York State, and New York City law. Yet, employee’s who are Muslim, Catholic, Jewish, Buddhist, or who adhere to any other sincerely held religious belief, often experience workplace discrimination.

Religion based decisions in the workplace are off-limits. Employees cannot be forced to participate in certain religious activity in the workplace. Employers are also prohibited from treating employees of a certain religion differently than other employees because of the employer’s own biases. In addition to protecting traditional religions, the law also protects employee’s who have a sincerely held belief. Long Island religious discrimination lawyers can help determine whether your beliefs are protected.

Religious discrimination in the workplace can take many forms. Below are some examples.

According to the 2017 Fiscal Year (“FY”) charge statistics released by the Equal Employment Opportunity Commission (“EEOC”), religion-based discrimination charges filed with the EEOC in New York during the 2017 FY reached an all-time high. 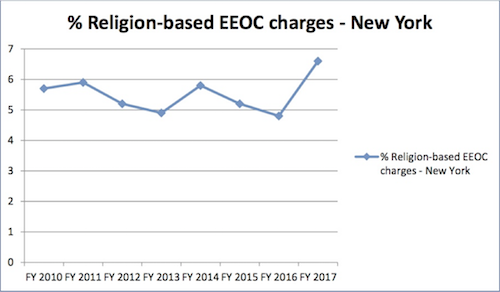 The line graph below shows the percentage of religion-based discrimination charges the EEOC received from New York beginning in FY 2010 until FY 2017. If you need an assistance filing a charge of discrimination based on religion with the EEOC a Long Island religious discrimination lawyer at Famighetti & Weinick PLLC can help.