On May 15, 2020, United States District Judge Gary R. Brown (Eastern District of New York) issued a decision relating to New York’s business shutdown order, also known as the Pause. In sum, Governor Cuomo’s order directs that all business which are non-essential must operate via telecommuting only and must reduce  their in-person workforce by 100%. Essential businesses may stay open with no reduction in force required. The order allowed for enforcement under the Public Health Law with consequences for businesses which did not comply.

Judge Brown’s order concerns a case filed by Omnistone Corp. and its owner. Among other things, Omnistone manufactures and installs stone countertops. In its complaint, Omnistone alleges that it requires its employees to wear protective equipment and that it maintains space between workers’ workstations. In other words, Omnistone suggested that it can safely carry on its business.

Nonetheless, Omnistone was deemed non-essential, but continued to operate, believing its business was essential to provide sinks in homes, and flooring. The Fire Marshall issued an “order to vacate” to Omnistone and further ordered that it cease its operations.

Based on these facts, Omnistone filed suit against Andrew Cuomo, New York State, and Nassau County. The lawsuit alleged that the shutdown order violates several provisions of the U.S. Constitution, including the due process clause, the contracts clause, the interstate commerce clause, and the Fifth Amendment’s takings clause. The lawsuit sought immediate injunctive relief from the court.

Judge Brown quickly disposed of Omnistone’s request for emergency relief. First, the court noted that Omnistone did not show any irreparable harm, arguing only that it risked losing skilled workers if it could not operate. This issue relates only to the question of whether issuance of an emergency order is appropriate, though.

Turning to the question of the merits of the plaintiffs’ claims, the court was similarly unpersuaded. Notably, the court observed that, “in the midst of a catastrophic global pandemic of a kind not seen for more than a century, it is difficult to imagine how counsel could argue that the ‘EO does not serve a legitimate public purpose'”, a requirement to show the order violates the constitution.

Judge Brown further observed that “when movants seek to compare preventing widespread sickness and death to their right to sell stone countertops, not much reflection is required to resolve whether this presents a serious question.” In other words, the court was not persuaded that the plaintiffs presented meritorious claims.

But, the court expressed some concern whether the due process and Fifth Amendment claims had merit. On these claims, Judge Brown was unable to determine on the record before the court, whether the state provided constitutionally adequate procedures for businesses to challenge their designation as either essential or non-essential. The court asked the parties to submit further briefing on the issue. Thus, we will monitor the case as it proceeds.

On May 18, 2020, United States District Judge Denise Cote (Southern District of New York), issued a decision concerning the constitutionality of social distancing orders in the City of New York. Specifically, the order relates to a plaintiff’s challenge that the City’s ban on public gatherings violates her First Amendment right to freedom of speech.

Like Judge Brown, Judge Cote’s decision does not suggest the question is a close call. Judge Cote noted that speech on matters of public concern is at the heart of the First Amendment, so it deserves special protection. Nonetheless, the First Amendment is not absolute.

Most importantly, under Supreme Court precedent, communities have a right to protect themselves from disease, so judicial scrutiny of measures taken for disease protection are limited to determining whether no substantial relation exists between the regulation and the public health, or whether the regulation is beyond all question a violation of fundamental laws.

The court recited some other rules concerning First Amendment analysis, but which are better left for law school con-law classes. Suffice to say for this blog, the court determined that New York City was permitted to regulate First Amendment activity under these circumstances, if the law was narrowly tailored to serve a legitimate government interest, and if it left open some other avenue of speech.

Applying the law to the New York City rule, the Court determined the rule is constitutional. First, the rule did not target any particular viewpoint or the content of the protests or speech. Rather, the rule targets the harmful effects of public gatherings due to the risk of an incurable disease.

Next, the court observed that the plaintiff conceded the City has a legitimate government interest in controlling coronavirus. But, the court emphasized that the City was trying to “slow the spread” of a disease which killed and hospitalized tens of thousands of New Yorkers “in less than three months’ time.”

With such severity, Judge Cote held the City’s measures were reasonable and narrowly tailored. The Court noted the law was implemented based on science and medical information and the court would not “second guess” those opinions.

Finally, Judge Cote acknowledged that protesting by one’s self is not ideal, but the alternative channels of protest, such as online, media, and alone in public, were acceptable under the circumstances.  In sum, the court held that the ban on public gatherings is constitutional and the case was dismissed.

These cases support Famighetti & Weinick PLLC’s initial opinions that covid-19 mitigation regulations are generally constitutional. Some courts have stricken down rules imposed by governors in states such as Wisconsin and Oregon. Those decisions, however, relate to how the rules were implemented under their respective state laws, not whether the rules are constitutional under the U.S. Constitution.

As we follow the evolution of the law concerning the constitutionality of social distancing and business shutdown orders, follow our social media channels to stay updated with our blogs. For specific questions, please contact our civil rights lawyers at 631-352-0050. 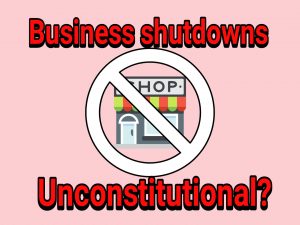