In 2017, the #MeToo movement trended across social media and in the news. Generated from reports of rampant sexual harassment over the course of many years in Hollywood, the social media hashtag #MeToo became popular as a way for victims to come forward with their stories and for others to show their support for victims and for putting an end to sexual harassment and sexual abuse.

At the heart of the #MeToo movement is the fact that many victims are taken advantage of by harassers who are in a position of power over the victim. The harasser uses that power position to not only assert the abusive conduct, but that power often intimidates the victim into keeping the harassment or abuse a secret, for fear of retribution from the harasser. The #MeToo movement inspired victims to come forward, who had previously remained silent the harassment.

#MeToo is, of course, a social media hashtag. According to CBS News, as of October 24, 2017, #MeToo had been “tweeted” 1.7 million times across 85 countries – and that was early on in the movement.

There is no doubt that combating sexual harassment is important and it appears social media and #MeToo has given many victims an outlet by which to come forward about their experiences. Victims, however, also have legal remedies which not only serve to bring harassers to justice, but serve also to prevent others from being harassed by alerting government agencies or even law enforcement to the fact that harassment is occurring in a workplace.

The evidence is clear that the #MeToo movement has generated many hashtags with stories of sexual harassment, but how many victims have made reports to enforcement agencies? In New York, the New York State Division of Human Rights is charged with investigating and enforcing New York’s anti-discrimination laws, codified in the New York State Human Rights Law, part of the state’s Executive Laws. Reviewing the Division’s filing statistics may shed light on whether the #MeToo movement has inspired victims to file charges with the Division.

The following charts show the number of overall filings submitted to the New York State Division of Human Rights from fiscal year 2010/11 to fiscal year 2016/17 and the number of those filings which were based on sex discrimination. The last chart shows the percentages of sex cases in relation to the total filings. 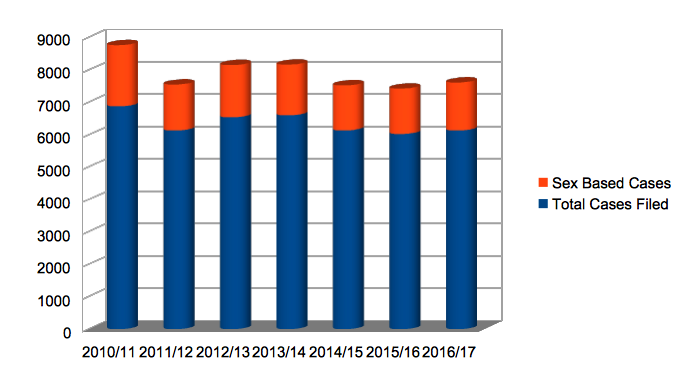 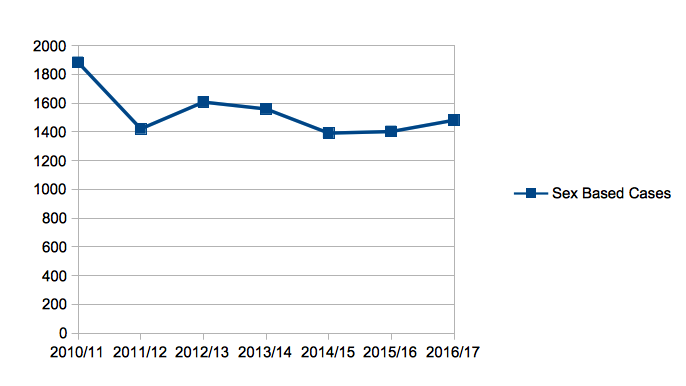 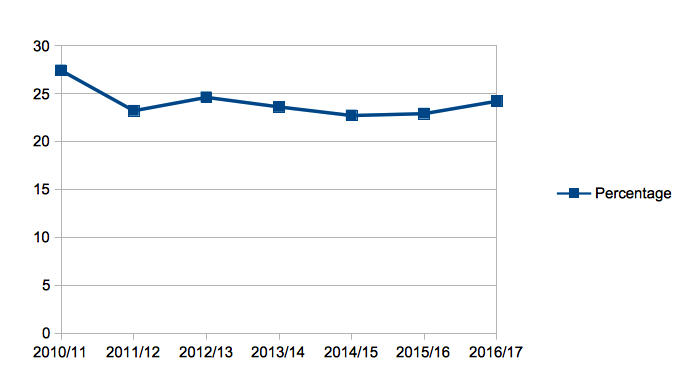 The charts show that there was a general trend towards less filings based on sex, both in numbers and percentage through the mid 2010’s, even though there was so spike in total filings in 2013/14. Sex based filings appear to be on increase starting in the 2015/16 fiscal year. It is important to note that the Division’s statistics for sex based charges of discrimination are not limited to charges of sexual harassment.

The broad category of “sex” discrimination covers many forms of discrimination, not just sexual harassment. So, these statistics may not be the best evidence of trends in sexual harassment filings, but are nonetheless insightful on the subject. Further, the latest Division report is from the 2016/17 fiscal year, which covers April 2016 through October 2017, so the latest reported period just barely covers the start of the #MeToo movement. We’ll have to wait and see what is revealed by the latest reporting period to draw any further conclusions. Further, the federal government created the Equal Employment Opportunity Commission to enforce workplace anti-discrimination laws.  These statistics do not include charges which were filed with the EEOC, so those statistics may or may not show the same trends as with the State Division.

If you have questions about sexual harassment, the #MeToo movement, our research on sexual harassment complaints, or any other area of employment law, contact one of our Long Island employment lawyers at Famighetti & Weinick, PLLC at 631-352-0050. We are also available on the internet at https://www.linycemploymentlaw.com or on Facebook.

The statistics presented herein were collected from data published by the New York State Division of Human Rights on its website.