Employees facing discrimination in the workplace must usually rely on statutes to sue their employers. Governments, however, must operate within the boundaries of the Constitution, including when the government acts as an employer. So, employees who work for a government, such as a state, town, city, or special district, may be able to bring legal claims against their employer when the government violates the employees’ Constitutional rights. Today’s Long Island employment law blog discusses a recent appellate court decision in New York which raises the bar for employment related claims against municipalities.

Elizabeth Naumovski worked for SUNY Binghamton as an assistant basketball coach. Soon after she started working, rumors circulated that Naumovski was having an “inappropriate relationship” with “J.W.,” a gay female-student athlete.  The rumors continued into the next academic year, so the school responded by imposing restrictions on interactions between students and coaches.

Yet, the rumors allegedly continued to persist into the next year. In early February 2010, the defendant head coach and athletic director spoke by phone and agreed to terminate Naumovski, allegedly because Naumovski demonstrated favoritism to some students.

Two days later, J.W.’s family received a letter alleging J.W. was “screwing” Naumovski. J.W. told Naumovski. About a week later, J.W.’s mother requested a meeting with Norris, but they agreed to meet after the season ended. In the interim, Norris fired Naumovski, alleging the reason was performance.

Based on the foregoing, Naumovski sued the school, the head coach, and the athletic director alleging claims of discrimination based on sex, perceived sexual orientation, and national origin. She alleged the discrimination violated statutes including Title VII, Title IX, and the New York State Human Rights Law.  She further alleged violations of the right to equal protection arising from Fourteenth Amendment, as well as violations of the First Amendment. Ultimately, parts of the case were appealed and the Second Circuit Court of Appeals was asked to review issues concerning Naumovski’s claims under the United States Constitution.

The Naumovski case, however, discussed another possible distinction between constitutional and statutory claims of discrimination, namely the level of causation a plaintiff must show. Historically, Title VII and Fourteenth Amendment discrimination claims were analyzed identically. Title VII is understood to require a showing that discrimination was a “motivating factor” in the employer’s decision to take action against an employee.  This is so because Congress amended Title VII to specifically state that Courts should apply the lessened causation standard of motivating factor.

But, Courts have also looked to tort law when analyzing discrimination claims. Tort law requires plaintiffs to show that a defendant’s conduct was the “but for” reason for an injury. Applying this principle, the Supreme Court (and the Second Circuit in other circumstances) has said that when a statute does not indicate some other standard of causation, such as motivating factor, then the appropriate standard is “but for” causation.  Using these principles to look at discrimination claims arising the Constitution, the Second Circuit determined that plaintiffs must show “but for” causation when suing under the Fourteenth Amendment, pursuant to 42 U.S.C. 1983.  This constitutes a heightened standard as compared to Title VII which requires only a showing that discrimination “played a role” in the employment decision.

The Naumovski decision made some other minor, but notable points. The Court acknowledged that a plaintiff may have a discrimination claim based on sex stereotyping if an employer believed the employee was more likely to have engaged in a sexual relationship based on the employee’s sex.

Moreover, the Second Circuit rejected that the cat’s paw theory of liability can be used in a constitutional case. Using a cat’s paw theory, employers are liable for discrimination if they negligently adopted the discriminatory animus of a lower level employee.

In sum, the Naumovski case represents several set backs for public employees alleging discrimination claims. Claims of employment discrimination asserted under the Fourteenth Amendment are now subject to the heightened causation standard of but-for, as opposed to Title VII’s motivating factor standard. Moreover, the cat’s paw of liability has been rejected as a basis for imposing liability against a public employer.

If you have questions about employment discrimination, Fourteenth Amendment claims, causation in discrimination cases, or public employees’ rights, contact a Long Employment lawyer at Famighetti & Weinick PLLC at 631-352-0050. Our website is at http://linycemploymentlaw.com. 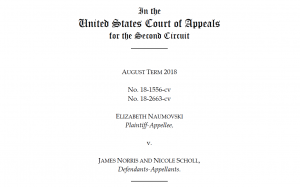