Are firefighters of small municipal fire departments covered by the Age Discrimination in Employment Act (ADEA)? On November 6, 2018, the United States Supreme Court answered that question the case Mount Lemmon Fire District v. John Guido. Today’s Long Island employment law blog takes a closer look at the decision and also discusses whether the decision offers a glimpse into how the new makeup of the court may affect employment cases.

The Mount Lemmon Fire District is a municipal fire department in Arizona. Purportedly because of a budget shortfall, the District laid off two employees, John Guido and Dennis Ranking, ages 46 and 54, respectively. The firefighters sued alleging their terminations violated the ADEA because the decisions were based on their age. The District moved to dismiss arguing that the ADEA only covers employers who have more than 20 employees, which the District did not. Ultimately, SCOTUS was asked to decide the issue.

Writing for the court, Justice Ginsburg noted that the ADEA was enacted to prevent “arbitrary age discrimination” in employment. She noted further that Congress initially excluded governmental agencies and required that employers employ a threshold number of employees for the law to apply to them.  But, in 1974, Congress amended the ADEA to specifically define employer as including “a State or political subdivision of a State.”

The words SCOTUS was required to interpret were “employer . . . also means . . . a State or political subdivision of a State” and whether “also means” added a new category of employers to the ADEA’s coverage. The court noted that “also means,” enhances language and acts to “additively” create a new category of employer. The court further noted that “also means” is used across many federal statutes and is used to add to a meaning, rather than to clarify a meaning.

The court rejected the Fire District’s argument that the court’s interpretation would mean that the ADEA would have broader coverage than Title VII (the anti-discrimination statute) and that Congress did not intend such a result. In fact, the court said its conclusion was reached precisely because Congress used different language in the ADEA than in Title VII. Further, the ADEA’s language mirrored the FLSA’s language which was intended to have broad application to even small employers.

Finally, the Fire District argued that the court’s decision would impact public services, but SCOTUS rejected this argument as well. Justice Ginsburg noted that many states regulate age discrimination for municipal employers of any size and that the court is not aware of any disruption in service because of those regulations.

In sum, the Supreme Court held that the plain language of the ADEA means that regardless of size, state and local governments are covered by the ADEA.

The Mount Lemmon decision was one of the first issued decisions concerning employment law decided under the new composition of the court, in other words, since Justice Kavanaugh’s confirmation. Thus, we thought it prudent to comment on what, if anything, this decision teaches us about how the court will handle employment law cases moving forward.  In brief, “the jury is out.” Notably, Justice Kavanaugh did not participate in the decision as the case was argued before he was confirmed. But, the court nonetheless decided the case unanimously by the eight judges who heard the case.  To those who believe the court will intentionally find ways to rule against employee and individual rights, the decision is confirmation that while there will certainly be legal issues which reasonable minds may disagree about, the justices of the Supreme Court are committed to making decisions based on the law. It is encouraging to see this court issue a unanimous employee-side decision.

If you have questions about age discrimination, the ADEA, the Mount Lemmon decision, or employment law issues under the new Supreme Court, contact a Long Island employment lawyer at 631-352-0050 or visit us on the internet at http://linycemploymentlaw.com. In addition to our experience in employment discrimination matters, we can help New York and long island firefighters in matters including disciplinary 209-l proceedings. 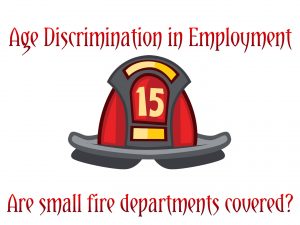 Are small fire departments covered by the ADEA?