On December 6, 2019, the the United States Court of Appeals for the Second Circuit decided an important case which clarifies the law concerning settling federal wage and hour cases. Today’s Long Island employment law blog takes a look at this decision.

In 2015, the United States Court of Appeals for the Second Circuit issued a decision which sent employment lawyers in New York into a panic. The decision, known as Cheeks, essentially requires that when parties settle a lawsuit arising under the Fair Labor Standards Act (FLSA), a court or the Department of Labor must approve the settlement. In other words, in the normal course, parties may settle cases under whatever mutually agreeable terms they decide on and the court has no say in the matter. Cheeks altered this practice for FLSA cases (the federal statute regulating minimum wage and overtime).

Moreover, Cheeks requires that when deciding whether to approve FLSA settlements, courts must review the settlement agreement for fairness and other requirements, including that the release is limited to wage claims and that the agreement does not require confidentiality. Further, courts review any amount of the settlement allotted for attorneys fees to ensure their reasonableness.

In the wake of Cheeks, employment lawyers worried about its implications. Defendants were concerned about the limitations it imposed on settlement agreements, barring standard language such as confidentiality and comprehensive general releases, two terms which typically entice settlement.  Plaintiffs were worried that attorneys’ fees would be scrutinized and that the settlement would be rejected by a court, notwithstanding the fact that the employee believed it to be fair.

So, some lawyers tried to be creative to work around the Cheeks approval requirement. One such method employed was to use Federal Rule of Civil Procedure 68 (Rule 68).  Rule 68 allows a party to make an offer of judgment to the other. Basically, Rule 68 says that a party can make an offer to settle the case to the other party.  If the offeree accepts, judgment is entered against the offeror and the case is over.  Rule 68 provides other incentives to use the rule (and to accept the offer), but those points are not relevant here.

When lawyers have used these creative methods to avoid Cheeks, some courts have noticed, and intervened to stop it.  This is precisely what happened in Mei Xing Yu v. Hasaki Restaurant, Inc. There, the defendants made a Rule 68 offer to the plaintiff, who accepted it.  Before the clerk could enter judgment, the court intervened and ordered the parties to submit the settlement to the court for approval. The parties objected, arguing that a Rule 68 offer is not subject to review pursuant to Cheeks. The court disagreed, but allowed the parties to immediately appeal, which they did.

On appeal, the Second Circuit reviewed of the history of the law leading up to the Cheeks decision. Relevant to determining the outcome of the Hasaki case, the Court specifically reviewed the history of Rule 68, and the legislative and judicial history of the FLSA.  Ultimately, the majority determined that Rule 68 concerns judgments, and nothing in the FLSA or Rule 68 allows for judges to intercede to review entry of a stipulated judgment.  In other words, Cheeks review does not apply to Rule 68 offers.

The Hasaki decision makes clear that Rule 68 is a viable option for parties trying to avoid Cheeks approval. Whether lawyers will begin to routinely use it is another question. Most practitioners likely agree that Cheeks has not proven to be terribly burdensome, although sometimes court approvals can take many months which delays settlements.  We’ll have to wait to see if there is a shift in strategy for settling FLSA cases.

If you have questions about unpaid wage or overtime cases, contact a Long Island wage theft attorney at Famighetti & Weinick PLLC. Our phone number is 631-352-0050 and our website, with more information about wage cases, is available at http://linycemploymentlaw.com. 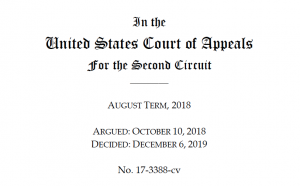