Before an employee may sue an employer for discrimination or retaliation (arising under federal law) employees must file a charge of discrimination with the EEOC.  In January 2020, the EEOC published data reporting the number of charges filed across the United States and its territories in 2019.  The publication shows the number of filings broken down by state and type of charge, and percentage of charges as a total of all filings and as a percentage of all filings within the state. Today’s Long Island employment law blog discusses the EEOC’s report.

New York saw a total of 3,220 EEOC charge filings (or 4.40% of all charges filed in the United States). This shows a continued a downward trend of EEOC charges in New York. As pictured in the graph below, in 2016, New York saw 3,740 total EEOC filings which steadily decreased to 3,220 last year. 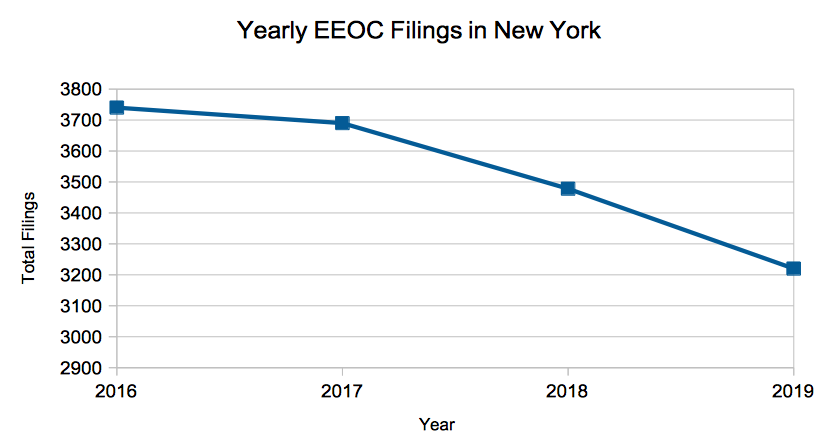 Nationally, total EEOC filings dipped to their lowest levels in 22 years.  In fiscal year 2011, filings peaked at 99,947.  Since then, filings have trended down, reaching a total low of 72,675 last year.  The trend can likely be attributed to better education, training, and enforcement.  Thus, there are indications that the work towards workplace equality is effective.  But, the statistics do not tell the entire story.

Many states, such as New York, maintain their own workplace discrimination laws. In New York, the Human Rights Law allows victims of workplace discrimination and retaliation to file claims directly in court or in the New York equivalent of the EEOC, the New York State Division of Human Rights. So, the EEOC’s statistics do not reflect whether there is an increase in state filings. In other words, federal filings may be trending down, while state filings are trending up. Indeed, many states’ laws, including New York’s, are broader and more employee friendly, than federal counterparts, inducing victims to file in state forums instead of the EEOC.

Which state leads the nation with EEOC filings? The results may be surprising. The answer is . . . Texas, and by a wide margin. Texas saw 7,448 EEOC filings in 2019 or 10.2% of all the filings in all the states and territories.  The next closest state is Florida with 5,990 filings, or 8.2% of all filings. These results may reflect the growing diversity of these states.

In sum, some national and New York trends reflected by the EEOC’s statistics suggest a decrease in reported workplace discrimination in 2019. When New York reports about its filings in the New York State Division of Human Rights, we’ll have a better picture about what’s happening in New York, specifically. We remain encouraged that the trends show an increased attention to workplace discrimination and better education throughout the country.  But, the numbers also reflect the need to do more.

If you have questions about workplace discrimination or retaliation, contact a Long Island employment lawyer at 631-352-0050. Our website is at http://linycemploymentlaw.com.