The Fair Labor Standards Act requires that employers pay to employees minimum wage and overtime.  When employers violate the FLSA’s requirements, employees may sue the employer to recover the unpaid wages.  Since 2015 when the Second Circuit Court of Appeals decided Cheeks v. Freeport Pancake House, courts have been required to scrutinize agreements settling FLSA cases. Courts generally looked at whether the agreement was fair and reasonable, including as to the amount of attorneys’ fees awarded.

In Fisher, the employee was hired as a “chaperone,” responsible for monitoring the halls in a hotel when student tour groups stayed.  As alleged by the employee, the employer failed to pay him overtime for the nine hours of overtime he worked per week.  Additionally, the employer did not provide to him paystubs, in violation of New York’s Wage Theft Prevention Act (WTPA).

Based on these alleged pay violations, the employee sued the employer in federal court seeking actual damages, liquidated damages, statutory damages, and attorneys fees.  The case was litigated for months, and required depositions and motion practice concerning the discovery. Ultimately, the parties attended a settlement conference with the Magistrate Judge and were able to reach a settlement in principle. The District Court ordered the parties to submit the agreement and a “Cheeks fairness submission.”

In accordance with the order, the parties submitted a letter detailing the settlement’s fairness. It noted the total settlement about was $25,000 and that $23,000 was allotted for attorneys’ fees and costs while $2,000 was allotted as payment to the employee.  The plaintiff’s lawyer noted that $5,140.39 was attributable to costs and that his total attorneys’ fees recorded for the case exceeded $50,000.

The District Court approved the total settlement, but denied the breakdown of the amount.  Instead, the Court directed that the employee receive $15,055, which was $3,885 more than his damages were calculated to be.  Further, the court reduced the attorneys’ fees to $9,610, finding the proposed amount to be excessive, then reduced costs to $1,695, finding the proposed costs to be unsupported. The plaintiff appealed.

On the question of attorneys’ fees, the Appellate Court observed that the District Court believed attorneys’ fees could not, as a matter of policy, exceed 33%.  The Court may several other holdings. First, reasonable fees does not mean that fees must be proportional to the recovery.  Indeed, the Court noted that the Fisher case is a prime example of why attorneys’ fees should not be tied to recovery.  Many FLSA litigants earn “modest” wages, meaning the possible recovery is not significant. Without incentive to recover attorneys’ fees perhaps greater than the amount of unpaid wages, attorneys would not take cases, in contravention of the remedial purpose of the FLSA.

Further, the Second Circuit held that the District Court exceeded its discretion in re-writing the agreements. The Court noted that while District Courts have a responsibility to review agreements for fairness and to prevent abuse, courts cannot re-write agreements which they find objectionable.  Rather, the court must indicate to the parties the portion or portions of the agreement which are not acceptable, and provide them an opportunity to revise the agreement.

If you have questions about the Fisher decision, unpaid wages or overtime, or the Cheeks requirements, speak to a Long Island employment lawyer. Our phone number is 631-352-0050. More information about wage theft and unpaid wages and overtime is available on our website at http://linycemploymentlaw.com. 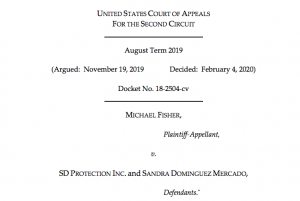