The right to freedom of speech is a core value guaranteed by the First Amendment to the United States Constitution. The First Amendment, however, regulates only government action, not private citizens or private companies.

The First Amendment provides different protections, or even not at all, depending on the type of forum involved. In public spaces, three different types of forums have been recognized: (1) the traditional public forum; (2) a designated public forum; and (3) a non-public forum.

On the other hand, designated public forums are spaces the government has opened for expression such as theaters owned by a local government or a meeting room at a state university. Nonetheless, in both of these forums, the government is allowed to intervene to impose some restrictions but not restrictions based on an individual’s own personal views. Otherwise, the government would be engaging in what is called viewpoint discrimination.

With technology becoming increasingly popular and social media becoming a space that is wide open for public discussion and debate, the forum classification process has become more difficult.

On May 23, 2018, a New York federal district court had to grapple with this exact issue. The peculiar addition in the case was that it also involved the President of the United States, Donald Trump.

In Knight Institute v. Trump, a group of seven individuals sued President Trump and his communication team after they criticized the President and his policies on Twitter and were shortly thereafter blocked from the president’s own personal Twitter account, @realDonaldTrump.

The main issue in the Knight Institute case, was whether President Trump’s Twitter account was a public forum. If so, under the First Amendment, President Trump would be prohibited from blocking Twitter users because of their personal views about him or his policies.

Most Twitter users are free to block any other user from their account without consequence. The president, however, is a public official so his actions in blocking users from his Twitter account implicate First Amendment concerns.

In the Knight Institute decision, Judge Naomi Reice Buschwald first went into a detailed overview of Twitter and described its functions and technicalities, including the process of blocking and muting other Twitter users. Judge Buschwald then discussed how the president uses his @realDonaldTrump Twitter account to post matters related to “official government business” such as his Administration’s upcoming legislative agenda and his visits and engagements with foreign leaders – just to name a few.

Although not mentioned in Judge Buschwald’s decision, President Trump does indeed have an official @POTUS Twitter account and an official @whitehouse account, however, the suit at issue involved the President’s actions on his own personal @realDonaldTrump account, which he nevertheless uses to post about government business.

While the blocked users could technically get around the block by using alternative methods to view the President’s tweets, it involved additional steps that other non-blocked Twitter users did not have to use.

The New York federal district court ruled that President Trump is not allowed to block users from Twitter merely because an individual’s views are contrary to his own. As Judge Buchwald wrote in her 75-page decision: “no government official – including the president – is above the law. . . .”

In sum, the Southern District’s decision is an important reminder that as new forms of communication and technology continue to grow, the legal framework used to determine the Constitutionality of government officials is also likely to expand. After all, social media pages including Twitter, Facebook, and Instagram are the new communication platforms of today and love it or hate it, they are not going anywhere anytime soon.

If you have questions about the First Amendment or social media and the law, contact a Long Island civil rights lawyer at Famighetti & Weinick, PLLC. Our website is https://www.linycemploymentlaw.com and our phone number is 631-352-0050. 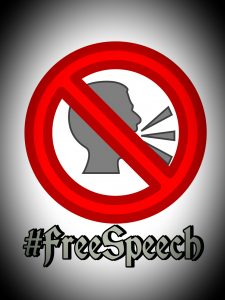