Are you facing a hostile work environment? You may think so, but courts may not agree.  Employment law requires employees to show that they faced severe or pervasive abusive conduct in the workplace, to prove a hostile work environment claim.  What is severe or pervasive conduct?  Today’s Long Island employment law blog explains.

Courts have long stated that their role is not to keep workplaces civil.  So, many employees may believe their bosses and/or coworkers are mistreating them, but the law would not regard the conduct as unlawful.  Employment laws only prohibit abusive conduct which is directed at employees based on the employee’s protected characteristics, such as sex, gender, race, or national origin.  Moreover, the conduct must be severe or pervasive.  The legal definition of severe of pervasive has been settled for a while, but because it’s a somewhat of a nebulous definition, courts and lawyers sometimes have trouble discerning when conduct meets that standard.

In Fox v. Costco, decided on March 6, 2019, the Second Circuit provided insight into questions. First, can an employee claim he subjected to a hostile work environment based on a disability?  Second, what kind of conduct can be severe or pervasive.  Let’s take the questions in turn.

Fox, though, faced another hurdle.  His claims were dismissed by the trial court because the judge determined that the conduct he faced was not severe or pervasive.  To be severe, a single incident must be “extraordinarily severe.”  In other words, one derogatory comment may not be enough, but a sexual assault should be more than sufficient.  But, conduct can also be pervasive, if it was continuous enough to alter the employee’s working environment.  So, one derogatory comment may not be enough, but if an employee faces derogatory comments every day over the course of months, the conduct be pervasive.

In Fox, the employee testified that his co-workers made comments mocking his tourette syndrome.  He further testified that the co-worker’s mocked him “for months and months.”  The trial court dismissed the claim because the judge believed the law required Fox to establish the number of time he heard the comments in a shift or per week.  But, the Appellate Court said this was the wrong standard.  The court said the employee is not required to identify the specific shift, week or month when he heard the comments and his testimony that the conduct persisted for months and months was sufficient.

The court was also persuaded to rule in Fox’s favor because his supervisor’s heard the comments and did nothing.  Thus, the conduct could be imputed to the employer, another necessary showing for a hostile work environment case. 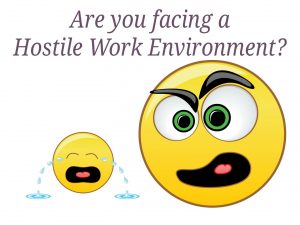