In 2010, Matt entered private practice and worked for a highly regarded employment litigation firm on Long Island.  Matt represented employees alleging claims of employment discrimination and retaliation.  Matt also worked on other complex matters handled by the firm.  For example, Matt represented a party in a litigation arising from the investment in and subsequent bankruptcy of a large Las Vegas casino/hotel, he defended the owner of an automobile dealership in a lawsuit contesting ownership of the dealership, and he represented the beneficiary of the estate of the “godfather of rap” in a dispute related to the administration of the estate.

Matt routinely appears in the federal and state courts of New York at both the trial and appellate levels.  Among his achievements, he won a plaintiff’s jury verdict for $150,00 in emotional damages in a First Amendment political association case, he won $100,00 in damages after a hearing on his client’s defamation case, and he obtained a judgment for more than $350,000 for his client who was not paid the proper minimum wage and overtime.  His cases have received attention from the press and he has been interviewed by newspapers such as Newsday, the New York Post, and the New York Daily News.

Matt’s work has been commended by judges, attorney review websites and magazines, and clients.  For instance, Matt received a 10.0 rating from attorney review website AVVO, he has been listed as a Rising Star in Super Lawyers Metro Magazine for 6 straight years, and a United States Magistrate Judge described Matt as “an experienced attorney . . . primarily in employment litigation” and noted his court submissions were “detailed, thorough, and accurate.”  About her experience with Matt, former client “Sara” said “Matt Weinick is an excellent attorney. With his assistance I was able to get exonerated from false allegations against me.”

Additionally, Matt is devoted to the Long Island legal community.  He is the secretary of the Nassau County Bar Association’s Labor and Employment Law committee, he has published multiple articles about employment law in the Bar Association’s newspaper, he has given Continuing Legal Education classes on employment law and led other discussions about civil rights laws, and he is a Guest Lecturer at Hofstra Law School where for three years, he has taught the Foundational Lawyering Skills class to second year students.

On the personal side, Matt is an avid SCUBA diver and he has dove in exotic locations such as the meso-American reef system in Mexico and the Catalina Islands in Costa Rica.  Matt also loves music and plays guitar and when not in the office, Matt can often be found practicing playing.  For nearly 24 years, Matt has volunteered in his community as an Emergency Medical Technician and/or Firefighter.

If you would like to speak to Long Island employment lawyer Matthew Weinick, he can be reached by phone at 631-352-0050 x 100, by email at mbw@fwlawpllc.com, or by text message at 631-629-2102. His website profile is available at https://www.linycemploymentlaw.com/matthew-weinick. 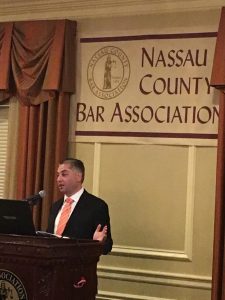