Another way, was to require that employees who were alleging workplace sexual harassment fight their claims in mandatory secret arbitration, instead of publicly in court. Today’s Long Island employment law blog discusses a new law passed by Congress which addresses these forced arbitrations.

Since the beginning of the #MeToo movement’s growing publicity, lawmakers have worked to take away employer’s tools for silencing sexual harassment victims. Federally, Congress altered the tax code to prohibit payments to sexual harassment victims from being categorized as a deductible business expense when the employer requires confidentiality about the payment, as a term for payment. Arguably, the goal was to make employers re-consider whether payments should be confidential and to provide incentive for employers to remove confidentiality terms from settlement agreements. F&W would argue that this is not effective.

In New York, lawmakers responded slightly more aggressively but making at least two changes to the law. First, New York expanded the coverage of its workplace discrimination laws to remove some hurdles that victims have faced in court in order to prove their sexual harassment claims. Second, New York outright prohibits discrimination case settlements (including sexual harassment) from being confidential, unless it is the “preference” of the victim to maintain the confidentiality of the agreement.

Indeed, some victims truly want confidentiality for a number of reasons. But, more often, employers are the ones who want to the confidentiality and so, implicit in any deal to settle a sexual harassment case, is that the victim will “prefer” that the agreement be confidential. F&W has many criticisms of this law, which will be saved for another blog.

These federal and state changes to discrimination laws left available to employers one powerful weapon to silence victims of sexual harassment. Arbitration is a method of “alternative dispute resolution.” In plain English, arbitration is a way for parties to resolve conflicts, including legal conflicts, in a private setting, without having to go to court. The TV show “The People’s Court,” is an example of arbitration, though obviously, that is a very public way. More frequently, arbitration involves the parties going to a private company where a neutral party, usually a lawyer or retired judge, will the hear the dispute and make a decision about how the dispute should be resolved.

In court, sexual harassment victims file a complaint, which is a document detailing the allegations of the sexual harassment. Filings in court are public, and indeed, most if not all filings these days in federal and New York state court, are made via online databases which are able to be viewed by anyone in the public. Thus, once a complaint is filed, the world can know about the victim’s allegations. Further, generally, trials are open to the public so everyone can see and hear the evidence.

In contrast, arbitration takes place behind closed doors. Though the process is similar to court, in that the parties exchange documents and an arbitrator, acting like a judge, may decide motions, hear evidence, and decide the case, all of that happens in private. Moreover, arbitration does not provide for jury trials and the rules of discovery and evidence may be different in court. For these reasons, and others, arbitration is usually disfavored by victims.

On February 10, 2022, Congress passed a law prohibiting forced arbitration in sexual abuse and sexual harassment cases. In an usual showing these days, the law passed with wide bi-partisan support, 335 to 97 in the House of Representatives, and the Senate similarly voted in bi-partisan fashion, with the bill being sponsored by a prominent Democrat and Republican Senator.

If you have questions about sexual harassment claims, sexual abuse claims, or arbitration, contact an experienced New York employment lawyer at Famighetti & Weinick PLLC. Our phone number is 631-352-0050. More information about employment law is available on our website at http://linycemploymentlaw.com. 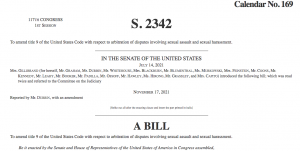