Since 2019, employment attorney Matt Weinick has worked as co-counsel representing four former high ranking New York City Police Department officers. On behalf of the officers and along with co-counsel, the firm filed a lawsuit in the Southern District of New York alleging that the City of New York Police Department deprived the officers of due process by coercing their resignations without providing notice of charges against them or an opportunity to be heard about allegations of wrongdoing, constituting a deprivation of due process. The complaint alleged that the City acted to avoid a departmental hearing and wanted the officers removed from the department to take the fall for ongoing allegations of widespread corruption in the department. The case received press attention from, among other papers, the New York Post.

After the lawsuit was filed, the City ask the court to dismiss the case. The City argued that a 1984 case decided by New York’s federal appellate court, prohibited employees from suing municipalities for a violation of due process, when the claim is based on an allegation that the employees’ resignations were coerced. The trial court agreed and dismissed the case.

F&W and co-counsel appealed the decision to the Second Circuit Court of Appeals, New York’s federal appellate court. On appeal, the firm argued, among other things, that (1) cases from the Second Circuit since the 1984 decision show why the case was improperly decided and (2) other appellate jurisdictions allow these types of claims to proceed, so the court should follow the lead of these other jurisdictions. Weinick orally argued the case before a three judge panel of the appellate court.

In a brief decision issued just weeks later, the court ruled that the 1984 case remained the law of the jurisdiction and barred the former officers’ lawsuit. The court affirmed the trial court’s decision to dismiss the case.

On April 2, 2021, Weinick, as counsel of record, and his co-counsel, filed a Petition for Writ of Certiorari with the United States Supreme Court. Appeals to the Supreme Court are not automatic. Rather, the court must decide which appeals to hear and which to deny. A Petition for Writ of Certiorari is the procedure used to ask the court to take up the case.

In this Petition, the employment lawyers argued that the Second Circuit’s decision conflicts with the law of the eight other jurisdictions in the country. The Petition showed how eight other appellate jurisdictions either outright allow, or would allow under the proper circumstances, a due process case to proceed based on a claim of a coerced resignation, such as in this case.

Further, the Petition discussed why a rule allowing such a claim to proceed is correct, and why the Second Circuit’s adherence to a rule which prohibits such claims is wrong.

The City of New York will have an opportunity to respond to the Petition. Then, the Supreme Court justices will decide whether the Petition should be granted. If granted, it’s not the end of the process. It means only that the court has decided to take up the case. Then, the parties will submit more legal briefing to the court and then appear for oral argument to answer the justice’s questions about the case.

If you have questions about due process, the Supreme Court, or a Petition for Writ of Certiorari, contact a Long Island employment lawyer at 631-352-0050. 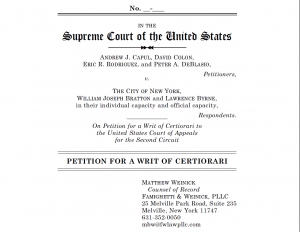