On March 26, 2021, the New York State Division of Human Rights issued a determination of Probable Cause in a firm’s religious discrimination case. Today’s Long Island employment law blog discusses the case and what happens next.

The following is taken from the New York State Division of Human Right’s final investigation report.

The firm’s client, a Muslim, worked for an ambulance company as a driver. When he was first hired, he was told he would have to shave his beard, which he initially did, but told the company he maintained his beard because of religious beliefs. He interprets his religious teachings as prohibiting Muslims from cutting their beards.

Months after his hire, the client provided a note from his Mosque detailing the nature of his beliefs and soon after that, he began growing his beard again. But, within a month, the company’s human resource director threatened the client that if he did not shave, he would be disciplined.

A year later, in late spring 2020, the client applied and interviewed for an open marketing position. The position would have meant a raise of at least $1 per hour. The client believed the interview went well and understood he was in the running for the job.

But, days later the director of marketing emailed the client saying, in sum and substance, that because the position required meeting with customers’ high end people, she needed him to shave his beard. The client reiterated that he wore the beard because of religious reasons and that there was no legitimate reason that the beard would interfere with his job. Nonetheless, the company did not hire the client to the new position.

In response, F&W argued that the marketing director’s email plainly states that the client was not offered the position because he wore a beard. The firm made several other points on behalf of the client, including showing that the company’s arguments were inconsistent and not credible.

On March 26, 2021, the Division issued a report summarizing its findings and concluding that Probable Cause exists to believe that the company engaged in unlawful religious discrimination. The Division determined that a judge would have to determine whether the client was qualified for the job and whether the client would have been hired for the job had he not a beard.

The next step is that the case will proceed to a “public hearing.” A public hearing is like a trial in court, except that an administrative law judge will hear the case, instead of a jury. At the public hearing, the judge will determine whether the company is liable for discrimination and, if so, will then make a determination about the amount of damages to award.

If you have questions about the New York State Division of Human Rights or religious discrimination cases, contact a Long Island discrimination lawyer at Famighetti & Weinick PLLC. Our employment attorneys are available at 631-352-0050. Our Hudson Valley employment law office can be reached at 845- 669-0040. Stay up to date on firm news and trending employment law topics by following us on Facebook. We also post fresh content to our blog on a regular basis. 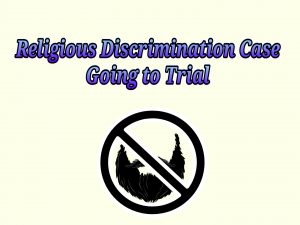